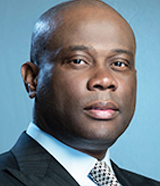 It’s a deal that few saw coming – or in any case not as fast as it did. The planned merger of Nigeria’s Access and Diamond banks, announced late last year, could be transformative for the country’s banking sector.

Asked what is appealing about Diamond Bank, Wigwe cites its large retail business of 19 million customers, the quality of its digital offering and its successes in financial inclusion. But he also looks ahead to the potential growth Diamond could bring, pointing to the bank’s strong relationship with mobile operator MTN Nigeria.

“We said to ourselves, this can create another 20 to 30 million customers over the next two to three years,” he says.

Access already has a strong relationship with Airtel, the other big mobile operator in Nigeria, Wigwe says. By cornering the market in this way, he hopes to make the most of the retail banking opportunities of mobile technology.

Size is certainly key to Wigwe’s vision. The chief executive, who has been at Access since 2002 and has headed the bank since 2014, says: “For us now, the most important thing is to create an institution that is seen as Africa’s gateway to the world. In the payment space, we want to dominate the African continent.”

Before adding: “Today, with the combination, we have 29 million customers, which means that technically, most transactions will settle on our platform.”

Wigwe is nothing if not ambitious.

“For me, the most important thing I want to achieve is to create an intelligent, efficient digital retail bank of the size of a global institution,” he says.

Balogun, who advised Access Bank on this merger, alongside Citi, says that Diamond’s customer base was the biggest attraction for Access.

“The big opportunity in Africa is retail and small and medium-sized enterprises,” he says.

Their combined coverage will allow Access to tap into those two markets.

Some argue that Diamond’s big exposure to SMEs in the oil and energy sectors means it is in trouble, and that the 260% premium to its share price that Access was willing to offer to clinch the deal was excessive.

But Wigwe and Balogun defend the offer price. Wigwe says it reflects the fact that he did not want to take the merger for granted.

Balogun adds: “Access paid a good price because, fundamentally, the franchise was undervalued. Over N1 trillion ($2.8 billion) of low-cost deposits has tremendous value in the hands of a bank that knows what to do with it.”

In fact, Diamond’s woes were precisely what made it a possible merger target, Balogun says.

“On its legacy corporate book it had run into some difficulty, and that’s what made it an acquisition candidate.”

“Having gone in properly now and looked at it and seen the names, it was an issue before, but every day we’re breaking it down and it’s getting better,” he says. Diamond’s loan book is now “largely” clean.

Morocco’s Attijariwafa Bank and Union Bank of Nigeria are among the banks that are thought to have also pitched to Diamond Bank in a bidding process that lasted only a few weeks.

In the end, Access beat off the competition at breakneck speed.

“This deal was expected to be completed in July 2019,” Balogun says.

“Because we realised, learning from Access Bank’s last acquisition [of Nigeria’s Intercontinental Bank], that if you take a long time to complete an acquisition in Nigeria, some of your best assets walk: customers walk, deposits walk and some staff might walk – because of the uncertainty.”

Asked if some shareholders might fight back against the proposed merger, Wigwe brushes aside any potential discontent: “We’ll get support from our shareholders, I’m confident.”

Balogun adds: “It’s a good deal in every respect.”

He says that the merger might be the largest to take place this year in Nigeria, but that others could be inspired by it to launch their own bids for banking M&A.

“A deal like this always provokes other people to take a look at their market share, their market positions,” he says. “I would expect to see one or two other things happen in the next 18 months. Everyone in tier two will now start to think about what next.”

Asked if larger financial institutions in Nigeria might also combine forces, Balogun says: “I’m not sure that there are many players in tier one that are equipped to do M&A. GTBank and Zenith are examples that have never bought anything. And First Bank don’t have sufficient capital to do an acquisition. So Access [which has a long history of growing through M&A] was always the obvious one.”

Access won’t look at any other targets for the time being, however.

“This is a big one to digest,” Balogun says. “They need to integrate this first.” For traders: our Portfolio of forex robots for automated trading has low risk and stable profit. You can try to test results of our odin forex robot free download
Signal2forex review