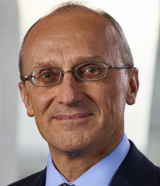 Andrea Enria is already at the sharp end of rebukes from Italy’s populist government, only two weeks into his new job as head of the eurozone’s single banking supervisor.

This included an unexpected European Central Bank (ECB) recommendation to bring coverage of its bad-debt pile up to 100% within seven years – something the market thought only stronger banks would have to do.

For deputy prime minister Matteo Salvini of the Northern League, the ECB might have been exerting unfair pressure on Italy.

“The new attack by the ECB supervisor on the Italian banking system and Monte dei Paschi shows once again that the banking union … not only does not make our financial system more stable, but it causes instability,” says Salvini, according to Reuters.

Salvini might have saved his breath. Italy has Europe’s biggest non-performing-loan (NPL) pile, but this coverage policy is eurozone-wide – and, anyway, Italian bank stocks soon recovered.

The large and mid-tier Italian banks all issued statements denying a “significant” or “material” impact on their financial forecasts, even though the ECB is also pushing them to reach 100% NPL coverage earlier than many investors imagined.

By Tuesday, Monte dei Paschi had completed the covered-bond issuance that had made it reveal the SREP details in the first place, such is the fear around these targets.

Yet some analysts think that just as the market took an overly optimistic interpretation of the ECB’s previous communication on its new coverage policy, now they risk being overly optimistic on the banks’ even vaguer statements on the effect of it.

Gross bad debt in Italy alone still amounts to about €200 billion, after all, with average coverage ratios ranging from about 45% to 60%, according to UBS.

Moving towards provisioning 100% of existing NPLs will cost Italian banks on average about 47 basis points of capital annually for the next two years alone, with the total cost (€63 billion) about three times more than for the laxer targets the market had assumed, according to Giovanni Razzoli, banks analyst at Equita in Milan.

“There will be an increase in banks’ coverage from these requests,” he says. “The banks are trying to downplay the situation, but the impact on some is quite significant.”

Sources at Italian banks insist the key point is that this is just a recommendation. The ECB’s initial policy in 2017 of asking banks to provision 100% within two years (unsecured) or seven (secured) was only for new flows, but it caused uproar in the European Parliament.

Roberto Gualtieri, chair of the economic and monetary affairs committee (ECON), insisted that only the legislature can set system-wide rules. The ECB later conceded the deadlines would merely be the “starting point for supervisory dialogue”.

When the ECB then said in July it would also set dates for 100% coverage of NPL stocks, it took more care not to make it look like a rule. Bank-specific dates would be set, considering their NPL stocks and financial health.

The problem, according to a bank insider, is that when the ECB – as it seems to be doing – puts banks in three clusters according to their NPLs stocks, each cluster with specific deadlines, it does not constitute a bank-by-bank approach.

It is so structured, says the banker, that it looks like a requirement; the ECB should say again publicly that the targets are not binding. Euromoney understands the supervisor has no plan to issue any statement to that effect.

The question therefore remains whether investors should take a more pessimistic view on the future effect on bank stocks. Whether or not the ECB will accept banks’ excuses for why they have not complied is not certain.

In any case, the Italian banks’ statements could be another example of them taking too much slack in assuming their own take on the loans’ worth will be shared by the supervisors and investors, and therefore adequate justification not to reach 100% coverage by the deadlines.

The central thrust of the ECB’s supervisory approach is to ramp up pressure on eurozone banks to cut NPL stocks, partly to make way for a common deposit guarantee scheme.

Meanwhile, more optimistic assumptions based on banks’ ability to work out bad loans on their balance sheets will look even more doubtful now in Italy, as its economy brushes with recession.

And, of course, if the explanation for not doing as the ECB suggests is unconvincing, the supervisor can weigh on individual lenders by other means, not least through higher SREP capital ratios, which are not merely recommendations.

In fact, healthier banks have even shorter deadlines.

UniCredit, for example, must reach 100% coverage by 2024. According to Italian daily Il Sole 24 Ore, confirmed to Euromoney by other sources, there are even stepped deadlines for reaching 100% coverage, starting next year.