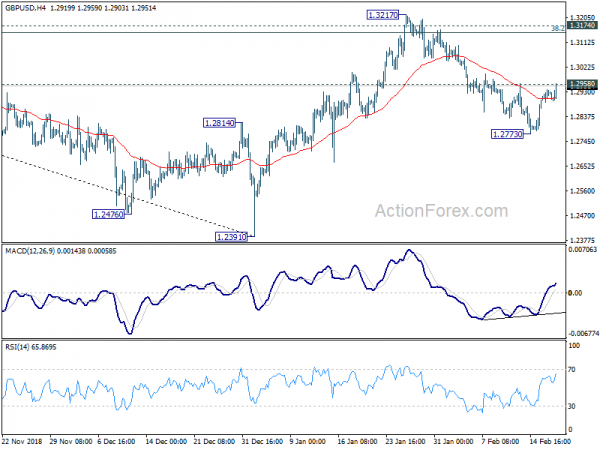 Sterling surges broadly in European session and it’s trading as the strongest one for today so far. There is some support by slightly better than expected wage growth. Also, there could be some buying on expectation for the parliament to take over control on Brexit at a later stage, thus avoiding no-deal scenario. But the rise is probably more due to selloff in EUR/GBP, which breaks 0.8728 minor support. At this point, the Pound has yet to prove is upside momentum.

Meanwhile, Dollar and Swiss Franc strengthen broadly today as sentiments turned mixed. Eyes will be on US-China trade negotiations which will resume today. Ministerial meetings will start Thursday, working towards a trade MOU. WTO warned today there is “urgency of reducing trade tensions” as the trade outlook indicted dropped to lowest since 2010. US and China better deliver something concrete to ease investors’ worries. For now, New Zealand and Australian Dollar are the weakest ones for today.

WTO noted that “this sustained loss of momentum highlights the urgency of reducing trade tensions, which together with continued political risks and financial volatility could foreshadow a broader economic downturn.” And, Trade growth is projected to slow to 3.7% in 2019 and could be revised lower if trade conditions continue to deteriorate. But “greater certainty and improvement in the policy environment could bring about a swift rebound in trade growth.”

German Altmaier: Most difficult part in US trade talks to follow

German Economy Minister Peter Altmaier told Deutschlandfunk radio today that “for some weeks and months now, we’re observing with concern that the U.S. is tightening its trade policies, that tensions are increasing.” And, “the impact can already be seen in the world economy, global growth has slowed.”

Regarding the trade talks between EU and US, Altmaier said “We are not yet where we want to be. We might have made one-third of the way and the most difficult part will be now”. Though he added he was in favor of lowering auto tariffs, “ideally to zero percent”. But Altmaier also reiterated EU’s position that agriculture will not be included in any trade talks. He said “agriculture is a very sensitive topic, so we don’t want to talk about this in the current situation.”

Trump has 90 days to make a decision on whether to act up the recommendations from a Section 232 national security probe on auto imports. European Commission President Jean-Claude Juncker believed that US will refrain from imposing auto tariffs on EU cars for now as “Trump has given me his word that there will be no car tariffs for the time being.”

ECB Vice President Luis de Guindos said policy makers are “currently analyzing the causes of the economic slowdown in Europe, some of which are temporary”. But he emphasized that “we will not take a decision until we have conducted a thorough analysis.”

And, regarding inflation, he said “even if energy prices were to fall a little in the coming months, we are confident that inflation will, over the medium term, converge towards our aim of below, but close to, 2 percent.”

On no-deal Brexit, de Guindos said “a disorderly Brexit… would represent a significant macroeconomic shock at a time when the European economy is already weakened.”

German ZEW: No rapid recovery, no improvement in next six months

“At the moment, we do not expect a rapid recovery of the slowing German economy. The economic situation in Germany has been weak, especially in the manufacturing sector. The figures for industrial production have once again seen a decrease, incoming orders are stagnant and foreign trade currently provides no fresh impulses. All of this is reflected in the fact that the assessment of the current situation has experienced a considerable decline. For the next six months, the financial market experts in our survey do not expect any improvement,” comments ZEW President Professor Achim Wambach.

European Commission Spokesman Margaritis Schinas, said President Jean-Claude Juncker will meet UK Prime Minister Theresa May in Brussels tomorrow to “take stock of the latest state of play on Brexit”. He reiterated EU’s position that “The EU 27 will not reopen the withdrawal agreement. We cannot accept a time limit to the backstop or unilateral exit clause.”

UK Prime Minister Theresa May’s spokesman James Slack said May is to seek legally-binding changes to backstop in meeting with Juncker. Meanwhile, the government is still working on alternative arrangements for backstop. The Cabinet has also discussed no-deal Brexit planning.

UK Attorney General Geoffrey Cox is expected to set out the proposed changes on Irish backstop today. He and Brexit Minister Stephen Barclay will return to Brussels at mid-week to present the proposals to EU chief negotiator Michel Barnier.

BoJ Governor Haruhiko Kuroda told the parliament today that “currency moves could have an impact on the economy and prices, so it’s crucial we take into account these factors when guiding monetary policy.”

And, if the currency moves are “having an impact on the economy and prices, and if consider it necessary to achieve our price target, we’ll consider easing policy.”

Yen dips mildly after the comments. But there is no follow through selling as what Kuroda said are pretty much known.

RBA reiterated its rate views in the February meeting minutes but sounded more cautious regarding the downturn in housing markets. The central bank maintained that “given that further progress in reducing unemployment and lifting inflation was a reasonable expectation, members agreed that there was not a strong case for a near-term adjustment in monetary policy.”

RBA tied the subdued consumption growth in Q4 to the possibility of being influenced by “lower housing prices and reduced housing market activity”. On housing, RBA admitted that “dwelling investment was also expected to decline more sharply than previously expected, consistent with the decline in residential building approvals and the fall in housing prices”. And, “members observed that if prices were to fall much further, consumption could be weaker than forecast, which would result in lower GDP growth, higher unemployment and lower inflation than forecast.”

According to a Reuters poll, all of the 41 economists expected RBA to keep interest rate unchanged at 1.50% through 2019. 28 expected RBA to stand pat at least until Q1 of 2021. 10 expected at least one cut by the end of 2020. NAB economist David de Garis was quoted saying “For the rates outlook, the course of the economy will drive whether the RBA manages to hold rates steady for a while, or, as the risk has grown in recent months, the RBA cuts again. If there is a move this year, it’s more likely to be an easing in policy.”