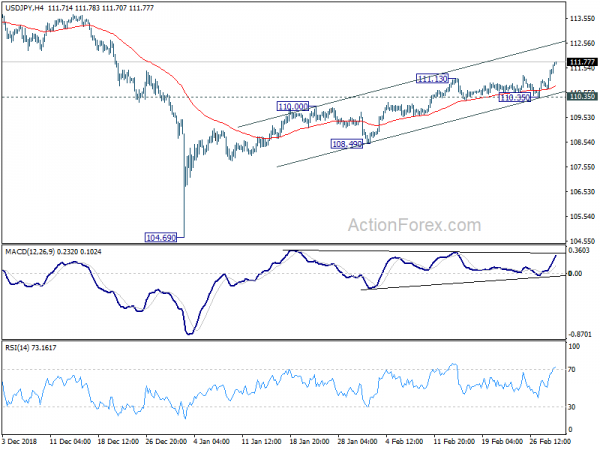 Yen’s decline continues today and remains the weakest one for the week. Widening treasury yields is seen as the main driving force behind Yen’s selloff. German 10-year yield at 0.186 is now heading back towards 0.2 handle. The rebound on improving outlook is remarkable, considering it closed at 0.096 last week. US yields also followed with 10-year yield closed up 0.018 at 2.711 overnight, reclaiming 2.7 handle. Meanwhile, Japan 10-year JGB yield stays negative at 0.015.

Staying in the currency markets, Dollar tried to rally overnight after stronger than expected Q4 GDP. But for the week, it’s still down against Europeans. Focus will now turn to ISM manufacturing and PCE inflation. Commodity currencies are trying to recovery today but remains the weakest ones for the week. Europeans are the strongest, led by Sterling.

Technically, a focus today is whether European majors will reverse this week’s recovery today. EUR/USD and USD/CHF are clearly losing some momentum. Break of 1.1316 and 1.0014 will indicate come back of Dollar. But for now, GBP/USD and GBP/JPY appear safe with their bullish run. Aussie is another one to note as AUD/USD might take on 0.7054 support. EUR/AUD could take on 1.6060 resistance. Break could trigger broad based selloff in Aussie.

Fed Chair Jerome Powell reiterated his recent messages in a speech in New York today. He noted that “nearly all job market indicators are better than a few years ago, and many are at their most favorable levels in decades.” Business-sector productivity growth also “moved up in the first three quarters of 2018.” Price stability side of Fed’s mandate is “in a good place” as “inflation by our preferred measure averaged roughly 2 percent last year” but “signs of upward pressure on inflation appear muted despite the strong labor market”.

Powell also noted again that “over the past few months we have seen some crosscurrents and conflicting signals about the near-term outlook.” Those include slowdown in major economies, particularly China and Europe. There is elevated uncertainty around unresolved government policy issues including Brexit and trade negotiations. Financial markets conditions have tightened since last fall. Also, “some surveys of business and consumer sentiment have moved lower. Unexpectedly weak retail sales data for December also give reason for caution.”

All in all, Fed will be “patient as we determine what future adjustments to the target range for the federal funds rate”. He also added that “common-sense risk-management approach has served the Committee well in the past.”

Japan PMI manufacturing was finalized at 48.9 in February, revised up from 48.5. It’s the first contractionary reading since August 2016. Demand conditions in Japan deteriorated at stronger rate while business outlook was broadly neutral having fallen for the ninth straight month.

Joe Hayes, Economist at IHS Markit noted that “Sharper reductions in output and demand drove the Japanese manufacturing economy into contraction during the midway point of Q1, compounding reductions already recorded in January. Global trade frictions and weak domestic manufacturing demand pose considerable risks to Japan’s goods producers. As such, firms pared back expectations to near-neutrality. The rebound seen in the official Q4 GDP estimate does not appear to be reflective of underlying economic conditions in Japan.

“With the consumption tax hike set to come into play later this year, weak domestic demand will only heighten fears that the economy could be poised for a downturn. Focus turns towards service sector data, which will need to show signs of resilience in order to offset the manufacturing drag.”

China Caixin PMI manufacturing rose to 49.9 in February, up from 48.3 and beat expectation of 48.7. The key points are “renewed rise in output as total new business picks up, “backlogs continue to rise, but employment trend remains subdued”, and “selling prices increase for first time in four months”.

Zhengsheng Zhong, Director of Macroeconomic Analysis at CEBM Group said “Overall, with the early issuances of local governments’ special-purpose bonds and targeted adjustments to monetary policy, the situation in the manufacturing sector recovered markedly in February due to the effect of increased infrastructure investment. Prices of industrial products also picked up due to improving demand and the rebound in international commodity prices. However, the pressure on manufacturers’ capital turnover became obvious again, which may reflect that the financing environment was not easing as expected, and the effect of credit expansion is not yet significant.”

Australia manufacturing PMI rose to 54, but conditions appear to be diverging

Australia AiG Performance of Manufacturing Index rose 1.5 to 54.0 in February. That’s the best monthly result since October 2018 and signals a better month of recovery following and “unreasonably slow summer”. While it’s still the 30th month of expansion, the trend has suggested “slowing growth rates since its recent peak in March 2018”.

Also, AiG noted that “conditions appear to be diverging” across the larger manufacturing sectors and their main locations. Three of the six sectors expanded, one was stable and two contracted. And, “the downturn in housing construction is already affecting some sectors, as is the uncertainty of impending elections”.

New Zealand terms of trade index dropped -3.0% qoq in Q4, much worse than expectation of -1.0% qoq. It’s also the largest decline since September 2015 quarter. Also ,falling global prices for milk powder and butter meant overall export prices dropped -1.7%. However, Stats NZ noted that “despite the latest fall, the terms of trade remained near the historic high in the December 2017 quarter.” Also from New Zealand, building permits rose 16.5% mom in January.