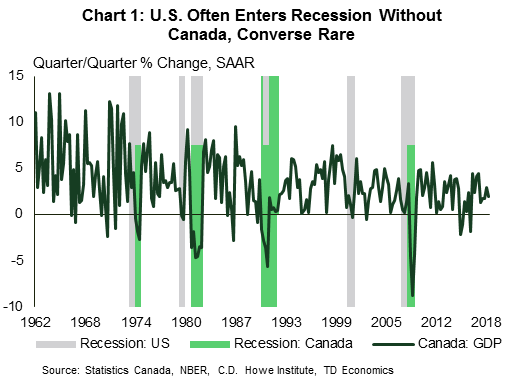 Canada is in the midst of a growth slump. Weaker-than-expected near-term economic momentum has emerged, at the same time that energy sector production curtailments are sending growth temporarily lower. Today’s weak GDP report (0.4% q/q saar) is likely to be followed with another near-zero out-turn in 2019Q1. Such a modest forecast means that it would not take too much of a miss versus expectations to send first quarter growth into negative territory. This has led clients to question the possibility of Canada entering a recession independent of a downturn in the United States.

A ‘true’ recession that hits all the economic markers is highly unlikely, but a technical recession is a possibility. A ‘technical’ recession is defined as lacking the combination of depth, breadth and duration. This is where GDP may contract or stagnate for two or more quarters in the absence of a parallel broad labour market stress. This is also where the bar is set for a ‘true’ recession that comes with widespread industry output contractions and significant employment losses across much of the nation.

We need only look back to 2015 to find evidence that Canada can indeed experience a ‘technical recession’ while the U.S. continues to expand. Although this is not common historically, we believe it’s possible that Canada may experience more of these temporary de-couplings from U.S. dynamics in the future. The “escape route” for Canada has often been the external sector, where depreciation of the Canadian dollar and healthy U.S. demand help to offset weakness elsewhere in the economy. This dynamic, however, has become more muted over the years, and other growth drivers lack pent-up demand to offer a large cushion (i.e. the housing sector and consumer spending).

Within the current cycle, the risk of a technical recession cannot be dismissed, but the data does not point to a downturn at present. Indeed, an assessment of key leading indicators points to a growth slump, not a contraction.

Getting our definitions right

Discussions of recession risks can often get bogged down in definitional distinctions, so it is important to distinguish between three types of economic performances before delving into the analysis. The first is a growth slump, where the economy manages to eke out growth, but just barely. This is, in effect, our near-term forecast. The second is a ‘technical’ recession (sometimes called a ‘statutory recession’ as it meets the definition included in the (since repealed) Federal Balanced Budget Act of 2015. This requires at least two consecutive quarters of economic contraction, and little else. A ‘true’ recession has a much higher bar – not only an economic contraction, but one that comes with breadth and depth. Compare for instance, the 2008/2009 recession, which saw the national unemployment rate rise 2.5 percentage points (and rise in all provinces), with the 2015 statutory recession, where the increase was a more modest 0.5 percentage points, driven by a narrow set of provinces with exposure to the energy sector: Alberta, Saskatchewan, and Newfoundland and Labrador.

The focus of this analysis is on the risk of a technical recession, which cannot be ruled out simply because of strong U.S. economic dynamics. The risk of a ‘true’ recession is quite low at present, and has effectively never occurred in history without a matching contraction south of the border.

History shows that a U.S. recession is a necessary (but not sufficient) condition for a Canadian downturn (Chart 1). Indeed, not since the government policy-induced recession of the Korean War era has Canada entered a ‘true’ recession without the U.S. also in the same predicament. This 1950s incident is not even captured in Statistics Canada’s current historical series for quarterly GDP and given the unique situation and cause, bears little informative value for the current context.1

Thus, even though there is a precedent, a Canada-only ‘true’ recession is effectively unheard of. But, as the well-known disclaimer says, past returns are not necessarily an indicator of future performance. One potential reason not to dismiss this risk is that the “escape valve” provided by a floating currency and the external sector may not be functioning as strongly as it once was. It was a softer currency and rising exports that helped Canada remain in positive territory during the 1998 Asian debt crisis, as well as the 2001 U.S. dot-com implosion, even as domestic demand softened markedly.

This brings us to the core message of this report. It is unlikely for Canada to enter a ‘true’ recession without the U.S., but a statutory or technical recession is a different story. 2015 is a helpful example of this. Over the 2015Q1 to 2016Q3, Canada saw three quarters of economic contraction (two back-to-back) and effectively no growth traction in between those periods. This ticked the box on the downturn having duration. But, importantly, the weakness was not widespread across industries or labour markets among the provinces, thus not qualifying as a ‘true’ recession.2 The 2015 episode marks a technical recession in our books. This was a rare occurrence considering that three other periods of weak economic momentum (1986, 1995, and 2001) failed to meet the two-quarter contraction bar of a technical recession. This is true even in instances where the U.S. economic cycle was formally characterized as a ‘true’ recession (2001) by the National Bureau of Economic Research (NBER).

Although the 2015 experience is rare, it would not surprise us to see more of these experiences in the future for a couple of reasons. To begin with, simple rolling regression results indicate that the relationship between the currency and exports has weakened materially, particularly since the late 1990s (Chart 2). To be sure, the evidenc