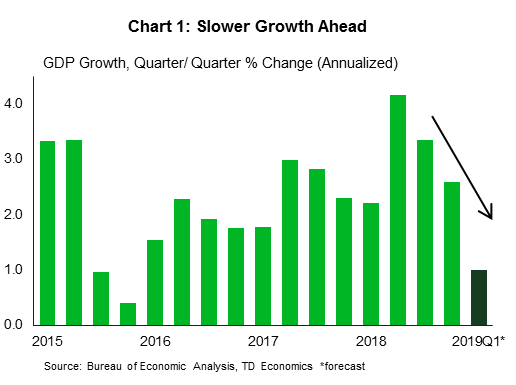 Data released this week confirms that in 2018 the U.S. economy clocked its best annual growth since 2015. The bad news is that a repeat performance is unlikely, with higher-frequency data suggesting the economy is heading into 2019 with decidedly less gusto.

The fourth quarter GDP report painted a picture of solid but moderating growth. For the year as a whole, the economy expanded by a robust 2.9% in 2018. However, the headline conceals the fact that growth moderated as the year progressed, slowing to 2.6% (annualized) in Q4 from the 3.4% and 4.2% pace seen in Q3 and Q2, respectively. Looking at the individual components, consumer spending moderated to 2.8% in Q4 from 3.5% in Q3. Business investment surprised to the upside, with growth accelerating to 6.2% from a 2.5% pace in the previous quarter. However, trade and residential investment were a drag on growth both in Q4 and for the year as a whole.

A solid end to 2018, but momentum has clearly waned at the start of this year. Consumer spending data for December confirmed that the weak retail print was not a fluke, as the negative mood led consumers to hold on tight to their wallets. In what’s become a recurring theme, first quarter growth will be bleak. The government shutdown and soft consumer spending translate to growth slowing to 1% in Q1 (Chart 1). However, as in prior years, the slowdown should prove temporary, with output forecast to rebound to an above 2% pace in the second quarter.

Extending previous declines, housing starts ended 2018 by plunging 11.2% (m/m) in December to 1.08 million (annualized). Rising mortgage rates amid high financial market volatility at the end of last year dented builders’ confidence, which fell to a 3-year low in December. Moreover, California wildfires also likely weighed on the headline. Although housing activity is not expected to race too far ahead in 2019, it should see a modest rebound. The recent decline in mortgage rates, back-to-back gains in home builder confidence in January and February, and a large gain in pending home sales this week all bode well for better performance in coming months (Chart 2).

Less hopeful is the underwhelming manufacturing data from this morning that suggests that the global manufacturing rout is not easing. The U.S. ISM manufacturing index declined in February, falling to the lowest level in more than a year, but remaining firmly in expansionary territory. Trade and Brexit uncertainty are a bigger drag on business sentiment in the Euro Area, where a broadening contraction in manufacturing PMIs is underway. Ditto for Japanese, Chinese, and ASEAN manufacturers.

On a positive note, trade tensions with China appear to be easing somewhat. Substantial progress on a trade deal has been made and the scheduled March 1st increase in tariffs on imports from China has been suspended. However, the progress on talks may have come too little too late, and the tariff cloud may continue to cast a shadow on global economy for some time, reinforcing the Fed’s patient stance.

Following two consecutive reports with 300k+ prints for December and January, we look for payrolls to mean-revert to 190k in February. In particular, we see scope for softness in the construction and in the leisure/hospitality sectors given recent above-average strength in hiring. Conversely, the phase-out of the impact from the government shutdown on the household survey should be reflected on a tick down in the unemployment rate to 3.9% in February, as furloughed federal employees exit their “unemployed on temporary layoff” status. Lastly, we expect wages to rise by a “soft” 0.3% m/m pace on a favorable reference week, increasing the annual print by a tenth to 3.3% in February. However, a “strong” 0.3% print could see an even larger increase in the annual pace to 3.4%.