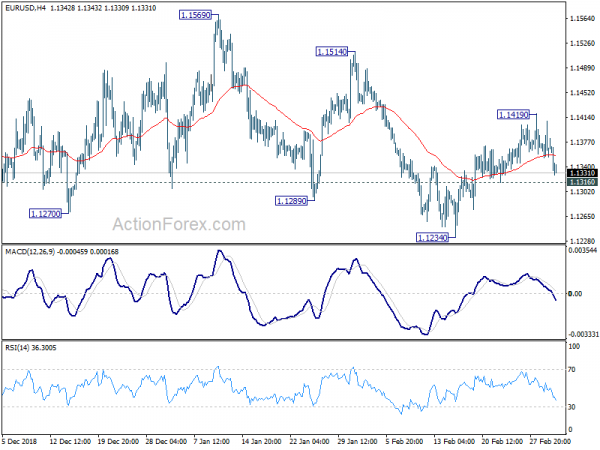 Global stock markets are generally higher today, continuing to ride on trade optimism. White House economic adviser Kevin Hassett added to the positive mood and said US Trade Representative Robert Lighthizer has made a lot of progress with China. And the deal may be finished some time soon. Also, WSJ reported that a signing summit could be held on March 27. On the other hand, EU-US trade negotiations will also start this week.

The currency markets are relatively quiet though. Euro is trading as the weakest one today despite better than expected investor confidence data. Pull back in German yield could be a factor weighing on the common currency. Swiss Franc is follows as the second weakest and then Canadian. New Zealand and Australian Dollars are the strongest one for today so far. But gains are limited as traders guard against any dovish twist in RBA statement tomorrow. Nomura follows Westpac and forecasts RBA to cut interest rate by 50bps this year.

European Commission spokesman Margaritis Schinas said ‘the discussions will focus on the next steps toward the implementation of the July 2018 Joint Statement and on the EU-US cooperation on World Trade Organization reform and level playing field issues”. He added that “the Commission will update the U.S. side on the state of play of the adoption of the negotiating mandates for EU-U.S. trade agreements on industrial goods and on conformity assessment.”

Also, Schinas said “the Commission will also raise the EU’s concerns on the tariffs imposed by the U.S. on steel and aluminum products and on the possible consequences of the recently concluded investigation on whether automobile imports represent a threat to the US’ national security”.

Eurozone Sentix Investor Confidence improved to -2.2 in March, up from -3.7 and beat expectation of -3.1. Current Situation index dropped from 10.8 to to 6.3, lowest since September 2016 and the seventh monthly decline. Expectations Index improved to -10.3, up from -17.3. Sentix noted that the indexes are “sending signs of stablisation” and “fueling hopes that there will be no recession. However, “it is too early to give the all-clear”.

And, thematically “investors expect slight support from monetary policy in the coming months from a pause in the interest rate cycle. Nevertheless, the central bank policy barometer does not give the impression that a sustained easing of monetary policy is to be expected. On the one hand, a rapid comeback of the economy would also surprise the central bank and, on the other, investors expect inflationary pressures to rise again.

On development to now in the strong improvement in Asia ex-Japan. Overall Investor Confidence index rose 9.9 to 15.3, highest since August 2018. Current Situation index rose from 22.3 to 24.5. Expectations index rose from -1.8 to 6.5, highest since March 2018. Sentix noted that the Chinese “government’s measures to stimulate economic growth both in fiscal and monetary terms are well received by the investors surveyed by Sentix.

UK PMI construction dropped to 49.5 in February, down from 50.6, missed expectation of 50.5. That’s also the first contraction in eleven months. Markit noted there was slight fall in construction output, led by commercial and civil engineering work. And, housing was the only category to register growth. And there was sharp deterioration in supplier performance.

Tim Moore, Economics Associate Director at IHS Markit, noted “construction sector moved into decline during February as Brexit anxiety intensified and clients opted to delay decision-making on building projects.” And, “risk aversion in the commercial sub-category has exerted a downward influence on workloads throughout the year so far.”