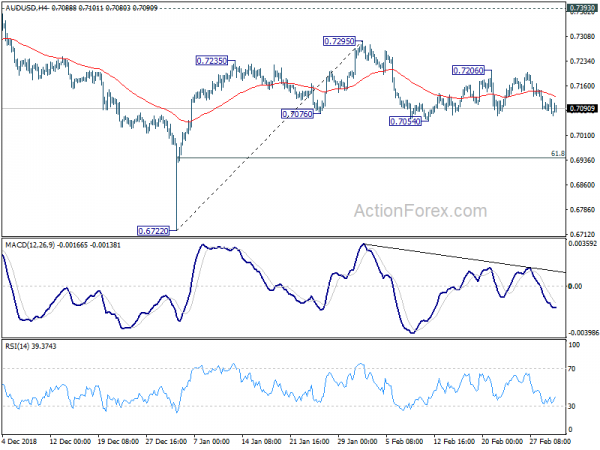 Strong risk appetite dominates Asian markets today on trade optimism after WSJ said a deal could be sealed by the end of the month. In particular Chinese Shanghai SSE surged through 3000 handle for the first time since June 2018. Japan 10-year JGB yield also turned positive again at the time of writing. Though, the currency markets are rather quiet as major pairs and crosses are bounded inside Friday’s range. Sterling is the strongest one so far while Swiss Franc and Yen are weakest. But the picture could easily change as the session goes.

Technically, USD/JPY, EUR/JPY and GBP/JPY are some intraday upside moment on overbought condition. But there is no change in the near term bullish outlook after recent breakout. We’d likely see further upside in these pairs, should German and UK yields rise again in European session. Dollar remains mixed in general. There is prospect for the greenback to regain near term bullishness. But EUR/USD has to break 1.1316 minor support first. AUD/USD needs to break 0.7054 support while USD/CAD needs to break 1.3340 resistance.

US and China could sign trade deal on March 27

The WSJ reported that US and China are close in on a trade agreement, which could be signed on March 27 between Trump and Chinese President Xi Jinping.

In the agreement, China would offer to lower tariffs and restrictions on US agricultural, chemical, auto and other products. Specific to the car industries, tariffs on imported vehicles would be lowered from the current 15%. China would also speed up removal of foreign ownership limitations on car joint ventures. As a sweetener, China would also buy USD 18B natural case from Cheniere Energy as part of the deal. On the other hand, US will lift most, if not all, of the punitive tariffs on Chinese imports imposed last year.

But so far there are practically no details on the core issues of intellectual property theft, forced technology transfer and state-owned enterprises.

The Telegraph reported that UK Attorney General Geoffrey Cox has given up the request on a time-limit on the Irish backstop or unilateral exit mechanism. Cox wanted to push for an independent arbitration mechanism which both UK and EU could give formal notice to end the backstop. But such independent arbitration would be outside the jurisdiction of the European Court of Justice. That is seen as totally unacceptable by the EU.

Separately, Trade Minister Liam Fox said he would be “shocked” if EU would insist on a delay of 21 months or two years extension of Article 50, if requested. He said “the European Union does not want Britain to fight the European elections.” Fox added it’s still “entirely possible” for leave EU on March 29. But a short extension to Article 50 may be needed to deliver a smoother exit.

BoJ Governor Haruhiko Kuroda said there is no specific stimulus exit strategy yet as it would take “significant time” to achieve the 2% inflation target. For now, BoJ will “patiently” maintain current monetary easing while “the economy is sustaining momentum for achieving the BOJ’s price target.”

Looking ahead: RBA, BoC and ECB to meet, NFP featured too

Three central banks will meet this week. RBA, BoC and ECB are all expected to keep interest rates unchanged. RBA turned neutral in February meeting as it indicated that the chance for next move as hike or cut are now more “evenly balanced”. We don’t expect RBA to change its rhetoric. But in any case, it’s a big week for Australian Dollar as building approvals, GDP, retail sales and trade balance will be featured.

BoC Governor Stephen Poloz’s recent comments indicated that the central bank is maintaining tightening bias. The main question is timing of the next hike and that would very much depend on how the impact of oil price slump and housing mark