GBP/USD Rally Unwinds But Not Likely Over 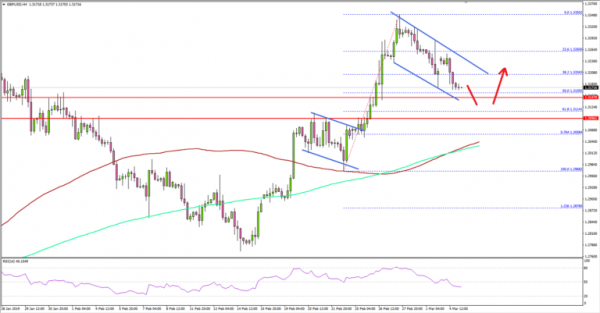 After forming a strong support above 1.2980, the British Pound started an uptrend above the 1.3200 resistance against the US Dollar. The GBP/USD pair climbed above 1.3300 before topping near the 1.3350 level.

At the outset, there is a major declining channel is in place with resistance near 1.3240 on the same chart. A break above the channel resistance and 1.3250 will most likely start a fresh upward move towards the 1.3300 or 1.3350 level.

Fundamentally, the UK Construction PMI report for Feb 2018 was released recently. The market was looking for a minor decline from the last reading of 50.6 to 50.3.

The result was disappointing as there was a sharp decline to 49.5 and the UK Construction PMI posted contraction for the first time in 11 months, led by commercial and civil engineering work.

The report added that:

The drop in construction work was led by reductions in commercial building and civil engineering activity. A soft patch for new orders so far in 2019 meant that job creation remained subdued in February.

The result weighed on GBP/USD, resulting in bearish moves. Going forward, today’s Services PMI reading and BOE’s Governor Mark Carney Speech could impact the market sentiment for the cable in the near term.