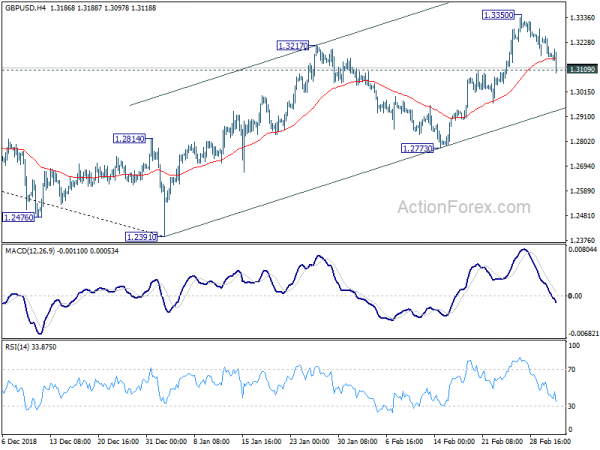 Sterling trades broadly lower today and suffers fresh selling in early US session. Some attributes the decline to reports that UK Attorney General Geoffrey Cox and Brexit Minister Stephen Barclay won’t get any breakthrough on Irish backstop in Brussels today. But it is actually hardly any news. UK government is seeking some legally binded assurances on the temporary nature of the backstop. Meanwhile, EU showed no indication on back down from the principle of avoiding hard Irish border. Pound’s could be partly due to weak PMI data. Or, it’s just reversing the rally on fading risks of no-deal Brexit. There is just no fresh development for Sterling bulls to cheer for.

Meanwhile, Dollar is the strongest one for today as treasury yield regains strength. USD/CAD breached 1.3340 resistance but there is again no follow through buying. The greenback also fails to break through near term resistance against Euro, Aussie and Swiss. Dollar might look into Boston Fed Eric Rosengren’s speech provides little inspiration. And the greenback might look into ISM services. Meanwhile, Euro is the second strongest one, followed by Swiss Franc. Data from Eurozone continue to paint a picture that the worst is behind. The common currency is also helped by rebound in German treasury yields.

Fed Rosengren: May take several FOMC meetings to see how much economy will slow

Boston Fed President Eric Rosengren said in a speech that “the most likely outcome for 2019 is relatively healthy U.S. economic growth somewhat above 2 percent over the course of the year, with inflation very close to Fed policymakers’ 2 percent target, and a U.S. labor market that continues to tighten somewhat.” But he also warned that “policymakers cannot place complete faith in what they believe is the most likely outcome”.

US growth would slow due to “diminishing fiscal stimulus” and the “effects of four increases” in interest rates last year. But to Rosengren, growth above 2% would still be “sufficient to bring additional improvements to labor markets, without much risk of higher inflation”, which is a “very welcome outcome”. He also noted “some risk that more pronounced slowdowns in the rest of the world could dampen U.S. growth more than I am forecasting.”

Meanwhile, there is “less reason to fear overheating”, with “somewhat greater risks to the outlook”. That justifies a pause in recent monetary tightening cycle. And, “It remains to be seen whether the few signs of weakness at the turn of the ye