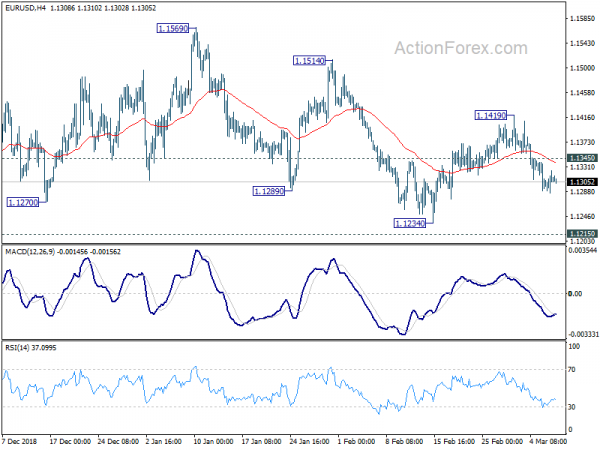 Asian markets are mixed today despite selloff in US overnight. Investors are generally non-committal, probably waiting for more concrete developments regarding US-China trade negotiations and Brexit. Though, the decline in US treasury yields is worth a note as 10-year yield closed back below 2.7 handle at 2.692. It remains to be seen if last week’s strong rise was a false dawn as more evidence of global slowdown surfaced. Non-farm payroll report, with wage growth, on Friday would probably firm up the tone in Dollar, yields and US stocks.

But for now, focus will turn to ECB meeting first. Euro is generally soft today as markets are expecting downgrade of economic outlook from the central bank. But Canadian Dollar is the worst performing one after BoC took rate hike off the table for now yesterday. Dollar is also soft for today on weakness in yields. On the other hand, Australian Dollar is regaining some ground after strong trade balance data.

Technically, yesterday’s strong rally solidifies USD/CAD near term bullish momentum for 1.3664 resistance. Dollar lost some momentum again against Euro and Swiss Franc. But with 1.1345 minor in EUR/USD and 0.9997 minor resistance in USD/CHF intact, more upside is mildly in favor in the greenback. Though, USD/JPY’s retreat from 112.13 looks basically corrective. Similarly, EUR/JPY and GBP/JPY are also engaging in corrective retreat. In other words, Yen will likely suffer renewed selloff after the corrective recovery completes. It’s just a matter of time.

US-China trade talks going well, getting words down on contract

Ted McKinney, Undersecretary for Trade and Foreign Agriculture Services, said US-China trade talks are going well. And, “presently there’s a lot of discussions going on by digital video conference, also a very good and productive thing”. Meanwhile, there’s just a lot of work in getting words down … a contract or agreement, and that’s the current status”.

Trump said in the Oval Office that trade negotiations with China are “moving along well”, “very nicely”. But he added that “there would either be “a good deal or it’s not going to be a deal”.

In the Beige Book economic report, Fed noted that “economic activity continued to expand in late January and February”. 10 out of 12 districts reported “slight-to-moderate” growth, except Philadelphia and St. Louis, which were flat.

BoC turned cautious, rate hike off the table for now

Canadian Dollar dived sharply overnight after BoC kept interest rate unchanged at 1.75% and turned more cautious. A rate hike should be at least off the table temporarily. The most important change in the statement is in the last paragraph. BoC now said the outlook “continues to warrant a policy interest that is below its neutral range”. And, given the mixed data, “it will take time to gauge the persistence of below-potential growth and the implications for the inflation outlook”. Also, with “increased uncertainty” about timing of future hikes, BoC will closely watch developments in household spending, oil and trade.

It’s less than a week from March 12 when another meaningful vote on Brexit deal could be held in the UK Parliament. But Bloomberg reported that positions on both sides are hardening rather than converging. Both the UK and EU are counting on the other to back down. EU officials are pessimistic about the chance of any breakthrough this week.

In particular, unnamed EU officials described the talks with UK Attorney General Geoffrey Cox earlier this week as some of the worst-tempered of the two-year process. Meanwhile, what Cox requested, independent arbitration of the contentious Irish backstop arrangement outside of European Court of Justice, was seen as unacceptable for the EU.

However, retail sales was disappointing. Sales grew merely 0.1% mom in January, rebounding from -0.4% decline in prior month, but missed expectation of 0.3% mom.

Also from Australia, AiG Performance of Construction index rose 0.7 to 43.8 in February, indicating a slower rate of contraction.

ECB rate decision and press conference will be the major focus today. No change in monetary policy is expected. The key interest rate should be held at 0.00%, with marginal lending facility rate at 0.25% and deposit facility rate at -0.40% respectively.

Since Q4 last year, economic outlook in Eurozone deteriorated and data released since January revealed little improvements. OECD downgraded Eurozone growth forecasts sharply lower from 1.8% in 2019 to just 1.0%. Most notably, Germany growth forecast was downgraded from 1.6% to just 0.7% in 2019. Italy is projected to contract -0.2% in 2019, revised down from 0.9% growth. There is a large chance for ECB to revised down both gro