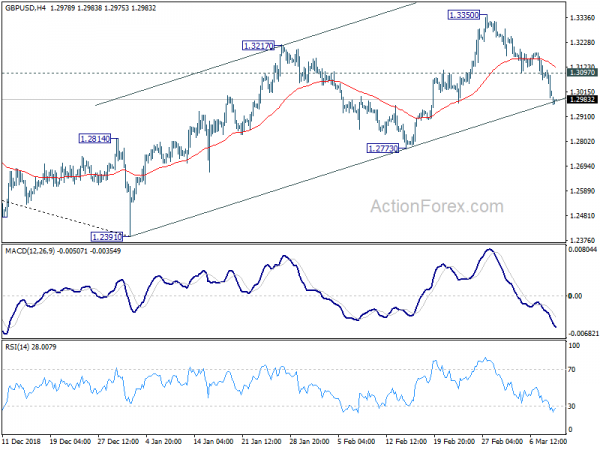 Sterling opens the week lower and stays generally weak today. As the crucial Brexit votes loom there is no breakthrough on the issue of Irish backstop. EU’s so called “concessions” were rejected by the UK government. And there is practically no chance of getting the same Brexit deal through the parliament. Seeking an Article 50 extension is the likely outcome after the week. But no one actually knows what’s next with the extensions, and what for. Staying in the currency markets, Yen is the strongest one so far even though Asian markets recovered from Friday’s steep losses. The markets are generally mixed though.

Technically, Yen will be a key to watch this week. After the strong rebound last week, Yen is pressing key near term resistance, and break will indicate near term bullish reversal. The levels include 124.23 in EUR/JPY, 77.44 in AUD/JPY, 82.26 in CAD/JPY. 110.35 support in USD/JPY is a bit farther away but it’s still worth watching. Dollar retreated mildly after poor job data on Friday. But there is no follow through selling. The greenback remains bullish in near term against most currencies except Yen. 1.1176 in EUR/USD, 0.7003 in AUD/USD, 1.0124 in USD/CHF and 1.3467 in USD/CAD will also be watched to track when Dollar resumes rally.

UK now enters into a crucial week with important Brexit votes. Prime Minister Theresa May failed to secure the needed changes to Irish backstop. EU chief negotiator Michel Barnier threw out a package of “concessions” that was rejected bluntly by the UK government. Foreign Minister Jeremy Hunt insisted that the meaningful vote on the Brexit deal will still go ahead on Tuesday, March 12. But the Sunday Times predicted that May will lose by 230 votes again, the same margin of defeat as in January for effective the same deal in the Commons.

Hunt now turned to Brexiteer Tories and threatened that vote down the deal would open the door to no Brexit. He said, “If you want to stop Brexit you only need to do three things: kill this deal, get an extension, and then have a second referendum. Within three weeks those people could have two of those three things … and quite possibly the third one could be on the way.”

On the other hand, the EU is trying to push the UK to make up it’s mind clearly, rather that getting an extension with no purpose. France’s EU affairs minister Nathalie Loiseau said “More time, to do what? We’ve had two years … If there’s nothing new, more time will not do anything other than usher in more uncertainty, and uncertainty just creates anxiety… It’s not time that we need, but a decision.”

Manfred Weber, the chairman of the European People’s Party in the European Parliament also said “May should end her zigzag course.” Also, “British politicians, and I mean Labour leader Jeremy Corbyn in particular, must finally put their own careers and party considerations behind them and look at the country’s interests again.”

In CBS’s 60 Minutes show, Fed Chair Jerome Powell reiterated that current interest rates are “appropriate” while inflation is “muted”. He also described the current rate setting as “roughly neutral”. Fed is patient regarding policy adjustment and that means “we don’t feel any hurry to change our interest rate policy”.

On the economy, he said “the outlook for the U.S. economy is favorable.” And, “the principal risks to our economy now seem to be coming from slower growth in China and Europe and also risk events such as Brexit.”

Powell added that “what’s happened in the last 90 or so days is that we’ve seen increasing evidence of the global economy slowing down” and “we’re going to wait and see how those conditions evolve before we make any changes to our interest-rate policy.”