GBPAUD Hits 1.88 after 2 ½-Years; Gains Could be Limited in Short Term 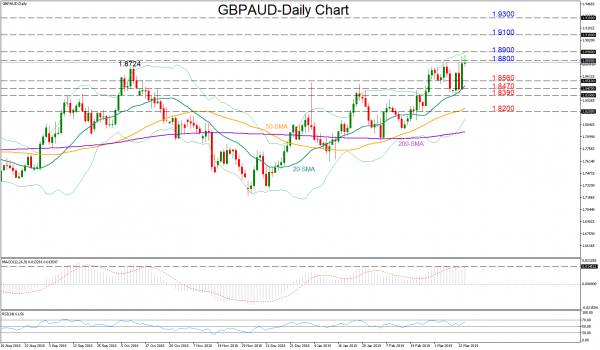 GBPAUD entered the 1.88 zone twice this week after more than 2 ½-years but the market was unable to retain gains above this mark, with the price returning to the 1.87 handle instead. The MACD has rebounded to meet its red signal line but as long as the indicator holds below that line, the pair is less likely to show significant improvement, especially if this is accompanied by a steadier RSI. Besides, with the price trading closer to the upper Bollinger band, room for more gains is limited in the short term.

Should the bulls clear the 1.88 round level, the way would open towards the 1.89-1-91 region where the priced stopped several times during 2014-2016. In such a case, the upward pattern started on October 2016 would extend further, increasing investors’ appetite for more buying. Higher, the 1.9300 mark, taken from the highs on December 2014, could come next into focus.

In the negative scenario, the pair could slide back into the 1.8560-1.8470 area, with the supportive 20-day moving average attracting special attention. Below that the bears need to violate the 1.8390 level to challenge the 1.82 key number.

In brief, GBPAUD faces a positive-to neutral bias in the short term, while in the bigger picture, it is trading in positive territory above all its moving averages.