Sterling Mixed as UK Will Decide on Brexit Delay, Aussie Dragged Down by China 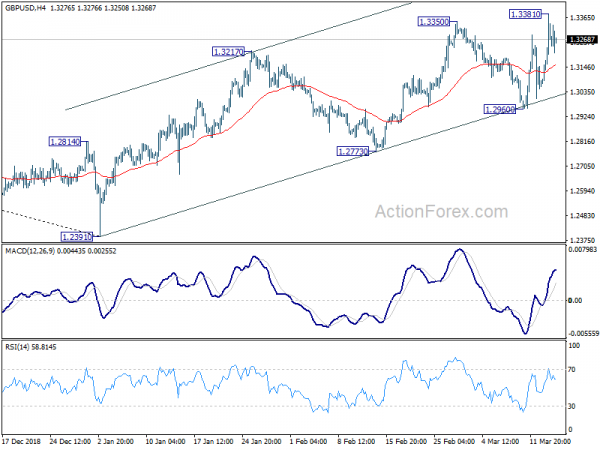 Sterling turns mixed as markets await yet another vote about Brexit in the Commons today. MPs is now given a chance to vote for delaying Brexit beyond March 29. The question is whether it would be a short delay with a plan, a short delay without a plan, or a long delay without a plan. We’ll soon find out. After the vote, Prime Minister Theresa May will write to the President of the European Council to request for Article 50 extension, with reason and time.

For now, Australian Dollar is the weakest one for today, followed by New Zealand Dollar. Dollar is the strongest one, followed by Swiss Franc. Weak data from China which suggests longer slowdown weighed slightly on sentiment. Also, there are reports that the trade negotiation with US is dragging on. The anticipated Trump-Xi summit is postponed to April at least. Euro is firm as the third strongest even though both German Economy Ministry and Ifo institute expect just modest growth in the country ahead.

Technically, there is no special development so far. The recovery in Dollar is not strong enough to warrant completion of recent corrective pull back yet. Though, USD/CHF is recovering ahead of 1.0027 minor support. Also, USD/CAD also recovers after breaching 1.3301 minor support. More upside in these two pair will reinforce near term bullishness in the greenback.

Trump-Xi summit reported to be postponed to April

Bloomberg reports that the planned summit between Trump and Chinese President Xi Jinping to seal the trade deal would be postponed to April. One of the reason is that China prefers a formal state visit rather than a low-profile appearance just to sign the deal.

But more importantly, as US Trade Representative Robert Lighthizer said earlier this week that there are still unresolved major issues”. We’ve repeatedly pointed out that there has been no concrete details on the core issues, including IP theft, forced technology transfer and market distortion by state-owned enterprises.

Trump has also tried to tone down on the agreement yesterday as he said “I’m in no rush. I want the deal to be right. … I am not in a rush whatsoever. It’s got to be the right deal. It’s got to be a good deal for us and if it’s not, we’re not going to make that deal.” And, he is also open to complete the trade agreement before or after the summit.

Former head of National Economic Council Gary Cohn said in a Freakonomics interview that Trump “needs a win” and he is “desperate right now” for a trade deal with China. Cohn added, “the only big open issue right now that he could claim as a big win that he’d hope would have a big impact on the stock market would be a Chinese resolution.”

The vote on delaying Brexit in the Commons is the major focus today. A big question is… for how long. Chancellor of the Exchequer Philip Hammond said, “this is not in our control and the European Union is signaling that only if we have a deal is it likely to be willing to grant a short technical extension to get the legislation through.” He added “if we don’t have a deal, and if we’re still discussing among ourselves what is the right way to go forward, then it’s quite possible that the EU may insist on a significantly longer period”.

Opposition Labour Party’s finance spokesman John McDonnell said “we will be putting an amendment down to ensure parliament considers an extension, it doesn’t necessarily have to be a long extension”. He added “we will go for a limited extension today.”

German Economy Minister Peter Altmaier urged the EU to discuss “constructively” with UK on the question of delaying Brexit. He emphasized “we urgently need clarity, we need clarity fast, but we will not make this by always criticizing our British friends and partners from