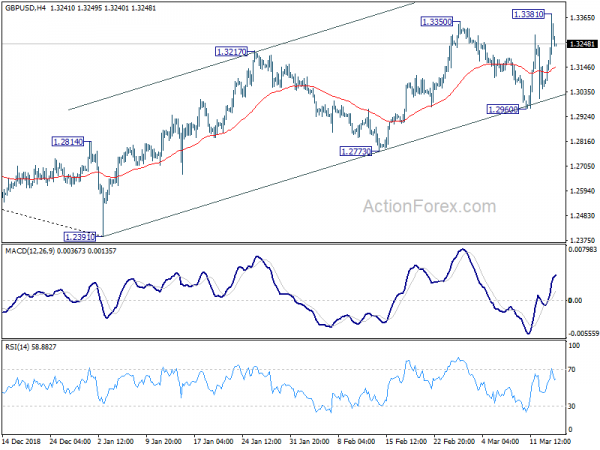 Sterling spiked higher overnight after UK Commons voted to reject no-deal Brexit. But there was no follow through buying as the Pound settles back into familiar range quickly. It’s indeed the weakest one for today so far, paring some of the gains. Focus will now turn to vote on Article 50 extension today. UK lawmakers finally have a chance to tell the world what they want, rather than what they don’t want. Following Sterling, Australian Dollar is the second weakest as weighed down by Chinese data, which suggest the slowdown could last longer. On the other hand, Dollar and Euro and the strongest ones for today.

Technically, we’d maintain that sustained break of near term resistance in the Pound is needed to confirm underlying momentum. That is, 1.3350 resistance in GBP/USD, 0.8474 support in EUR/GBP and 148.57 resistance in GBP/JPY. Otherwise, current rise in the Pound is viewed as part of near term volatility only. USD/CHF dropped notably overnight and is now close to 1.0027 minor support. As long as this support holds, we’d expect an eventual break of 1.0128 resistance in USD/CHF as recent up trend resumes. But break will mix up the outlook and turn focus back to 0.9926 support. USD/CAD breached 1.3301 minor support overnight with help from rally in WTI oil. This level will also be watched today too as indication of bearish reversal in USD/CAD.

Sterling spiked higher after UK Commons passed yesterday a non-binding motion to reject no-deal Brexit under any circumstances. But the Pound quickly retreated again as focus will turn to vote today on whether to ask the EU for Article 50 extension. Also, question is on whether there would be a short extension of a long extension.

The final motion was voted for by 321 to 278, a majority of 43. The motion reads: “This House rejects the United Kingdom leaving the European Union without a Withdrawal Agreement and a Framework for the Future Relationship”.

The original motion was changed after the Spelman/Dromey amendment was narrowly passed by 312 to 308, just a mere majority of 4. The original motion reads: “This House declines to approve leaving the European Union without a Withdrawal Agreement and a Framework for the Future Relationship on 29 March 2019; and notes that leaving without a deal remains the default in UK and EU law unless this House and the EU ratify an agreement.”

Prime Minister Theresa May, however insisted that the votes do not change the fundamental problem. And the only way to rule out no-deal is to vote for a deal. She also warned that if MPs do not vote for a Brexit deal soon, she will have to seek a long article 50 extension, which would mean the UK having to take party in the European elections.

A European Commission spokesperson quickly responded:: “There are only two ways to leave the EU: with or without a deal. The EU is prepared for both. To take no deal off the table, it is not enough to vote against no deal – you have to agree to a deal. We have agreed a deal with the prime minister and the EU is ready to sign it.”

Trump in no rush to complete trade deal with China, still expecting a summit with Xi

Trump insisted that the trade negot