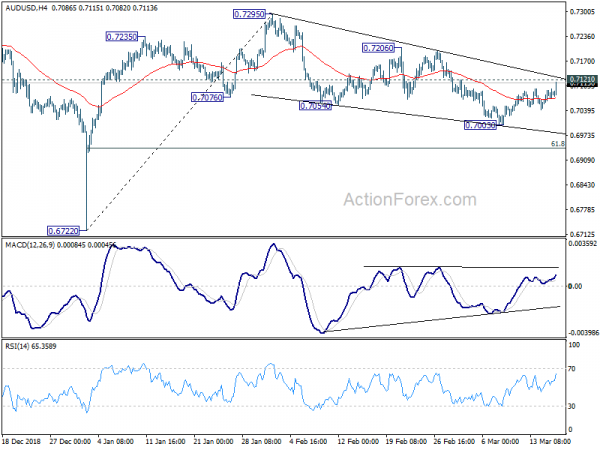 Strong rally in Chinese stocks is lifting Asian markets broadly higher today. Chinese president Xi Jinping is set to visit Italy, France and Monaco from March 21 to 26 this week. While there’s no detail on the visits yet, it’s believed that there could be signing of an agreement for Italy to join the Belt and Road infrastructure investment initiative. But while that might lift sentiments, the could look is still clouded by uncertainty in trade negotiations with the US. The highly anticipated Trump-Xi summit might only happen in April at the earliest, or in June alongside G20 summit in Japan, or might not happen at all.

Nevertheless, the currency markets are following strong risk appetite with Australian Dollar leading other commodity currencies higher. Yen and Dollar are the weakest ones. Sterling is also sluggish ahead of another meaning vote on Brexit deal, most likely on Tuesday. Technically, an immediate focus is 0.7121 minor resistance in AUD/USD. Break will suggest that recent decline from 0.7295 has completed and further rise would likely be seen back to 0.7206 resistance at least.

The UK Parliament will have meaningful vote on Prime Minister Theresa May’s Brexit deal for the third time this week. Ahead of that Chancellor of Exchequer Philip Hammond said a significant number of Conservatives have changed their mind last week to back the plan. And he expected more to come even though the government hasn’t had enough numbers yet. And, “it is a work in progress”.

Hammond said “What has happened since last Tuesday is that a significant number of colleagues, including some very prominent ones who have gone public, have changed their view on this and decided that the alternatives are so unpalatable to them that they on reflection think the prime minister’s deal is the best way to deliver Brexit,”

Also, BCC noted that business investment is projected to contract by -1.0% in 2019. And that would be the weakest outturn in a decade since the financial crisis in 2009. BCC blamed that “ongoing uncertainty over the UK’s future relationship with the EU is expected to continue to weigh on investment intentions.” And, “diversion of resources to prepare for no deal and the high upfront cost of doing business in the UK is also projected to limit the extent to which investment activity will bounce back over the near term.”

Three central banks will meet this week, including Fed, SNB and BoE. BoJ and RBA will release meeting minutes too. Fed is expected to keep federal funds rate unchanged at 2.25-2.50%. “Patience” will remain the central tone of the statement and other communications. Fed might also announce the plan to end the balance sheet roll-off and that could catch some attentions. But main focus will be on the new economic projections. Since late December, Fed officials have sung a chorus indicating they’re in no hurry to lift interest rates unchanged. They finally have a chance to tell the markets the reasons for the change in stance with concrete numbers.

SNB is expected to keep the sight deposit rate at -0.75%. The three-month Libor target range should be held at -1.25% to -0.25% too. The central bank should also maintain that it’s necessary to keep interest rate negative and pledge to intervene in