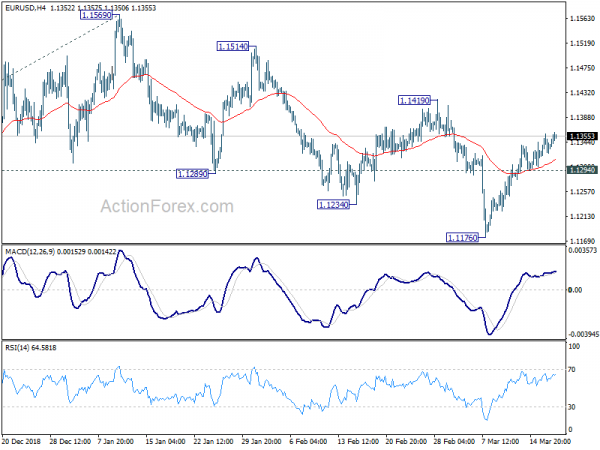 The forex markets are having no clear direction for the moment. In particular, positive data from Europe were generally ignored by currencies even though yields and stocks are lifted. At the same time, there is no clarity regarding Brexit after Commons Speaker John Bercow ruled out meaningful vote on the same Brexit deal yesterday. Sterling edged higher earlier in European session but quickly retreated back. Prime Minister Theresa May may finally tell us what’s next after her Cabinet meeting.

Staying in the currency markets, Canadian Dollar is currently the strongest one for today, with help from oil prices. However, it should be noted that WTI crude oil, hitting 59.80, is now in key resistance zone around 60 and reversal could happen any time. New Zealand Dollar is the second strongest, followed by Euro. Australian Dollar, Dollar and Yen are the weakest ones. Nevertheless, given than most pairs are stuck in tight range, the picture can easily change in US session.

There are reports that EU is going to offer UK a conditional Brexit extension in the summit later this week. With that change in circumstance, Prime Minister Theresa May could bring her deal back to the Commons for another meaningful vote. Additionally, it’s reported that UK could theoretically ask for a long Brexit delay but leave the EU before it runs out.

As Brexit Minister Stephen Barclay noted, Bercow already “pointed to possible solutions” to the current crisis. He added “you can have the same motion but where the circumstances have changed.” Also, Barclay noted “the speaker himself has said that where the will of the House is for a certain course of action, then it is important that the will of the House is respected.” Thus, both an extension or a shift in support, could indicate a change in context.

However, we’d point out that whether there is another vote on Brexit deal or not, and through what workaround, the fundamental question is not solved. That is, is there enough votes to the current Brexit deal through? Without enough votes, all solutions are just solutions to the problem of Brexit vote, not to Brexit itself.

European Commission spokesman Margaritis Schinas warned that “We are now exactly 10 days away form the United Kingdom’s withdrawal for the European Union”. And, “It will be for the Prime Minister and Her Majesty’s government to decide on the next steps and then to inform us accordingly and swiftly. The European Council in the art 50 constellation is on Thursday,”

Germany’s Europe Minister Michael Roth warned that “our patience as the European Union is being sorely tested at the moment.” He added “I can only call once again on our British partners in London to make concrete proposals at last on why they want an extension.”

French EU affairs minister Nathalie Loiseau also complained that “this uncertainty is unacceptable”. She added: “We need an initiative, we need something new because if it’s an extension to remain in the same deadlock… How do we get out of this deadlock? – this is a question for the British authorities.” Also, “Grant an extension – what for? Time is not a solution, it’s a method. If there is an objective and a strategy and it has to come from London.”