US economic growth is set to slow sharply this year and next, according to CNBC’s Fed survey 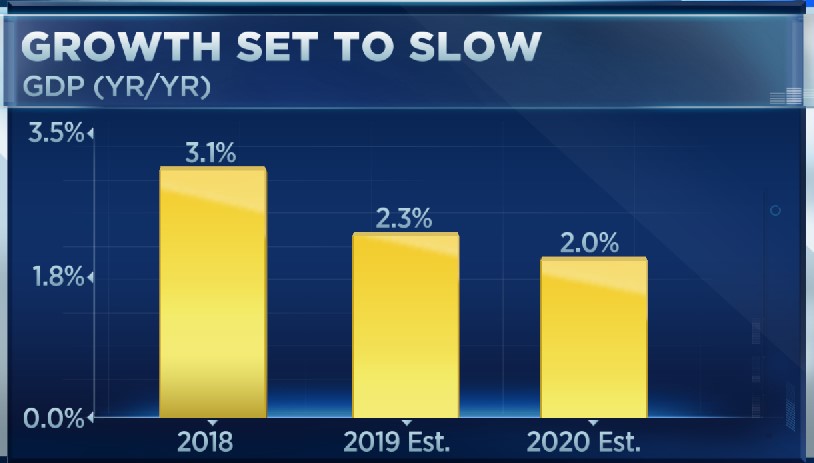 U.S. economic growth is set to slow sharply this year and next, according to respondents to the CNBC Fed Survey for March, and weaker global growth and tariffs are seen as the major culprits.

The average forecast for gross domestic product growth this year is just 2.3 percent, down from 2.44 percent expected in the January survey and a further slowing from the actual 3.1 percent year-over-year pace for the fourth quarter of 2018. Economic growth is seen stepping down below 2 percent in 2020, according to the survey.

The outlook for slower growth has prompted the 43 survey respondents to lower their expectations for Fed rate hikes this year and next — barely forecasting one hike and some even seeing rate cuts on the horizon.

Asked about the biggest threats to the US expansion, slowing global growth and protectionist trade policies ranked No. 1 and No. 2, respectively.

“If Trump wants to be a two-term president, he needs to make a China trade deal and start lowering tariffs across the board,” said Hank Smith, co-chief investment officer, Haverford Trust Company. “This will cause business confidence to rise and capital spending to increase, stimulating the economy.”

A weak outlook for growth abroad knocked about 40 basis points (or 0.4 percentage points) off of GDP forecasts this year, according to respondents, who include economists, fund managers and strategists. Tariffs — both those put in place by the Trump administration and retaliatory tariffs from other countries — are estimated to take another 20 basis points off of growth.

The good news is that most respondents expect a US/China trade deal this year. While 79 percent expect a deal, just 2 percent see a new round of tariffs and 17 percent expect a continuance. That suggests, however, that a deal could be baked into the stock market.

Art Hogan, chief market strategist, National Securities, worries that tariff problems could go on even after a US-China deal. “If the administration decides to pivot immediately to tariffs on European autos, any positive momentum derived from the end of the US-China trade war will dissipate rapidly,” Hogan wrote.

The concerns about trade policy come from a group where 51 percent approve of President Trump’s handling of the economy and 32 percent disapprove.

How does the Fed process all these crosscurrents? With fewer rate hikes and a bigger balance sheet, according to respondents. Sixty percent still see a rate hike this year, but that’s down from 78 percent in the January survey. And now 14 percent forecast a rate cut, rising to 35 percent in 2020.