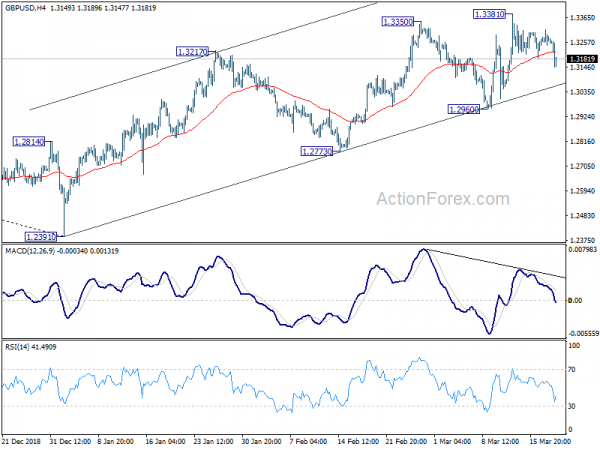 Sterling suffers another round of selloff today as the markets clearly disapprove of UK Prime Minister Theresa May’s next step on Brexit. In short, she’s just seeking a short delay until June 30. But any date beyond May 23, when EU elections take place, is already rejected back on March 11. May also intends to bring her old deal to a third meaningful vote and there is so signs on any chance to get through the Commons. More volatility would likely be seen in the Pound as the March 21-22 European Council meeting looms.

Staying in the currency markets, Canadian is also among the weakest ones as WTI crude oil dips sharply to 58.94 after failing to break through 60 key resistance zone. But the find direction, a breakthrough or rejection, could depend on oil inventory data to be release soon. Australian Dollar is currently the strongest one, followed by Swiss Franc. Dollar is mixed, awaiting FOMC rate decision, economy projections and press conference.

UK PM May seeks Article 50 extensions until June 30, But EU Juncker warns against it

UK Prime Minister Theresa May confirms at PMQs in parliament that has written to European Council President Donald Tusk to seek extension of Article 50 until June 30. She noted that MPs voted for only a short extension last Thursday. Also, holding European election would not be in anyone’s interest. May also said the government will hold another meaningful vote.

May said: “As prime minister, I am not prepared to delay Brexit any further than the 30th of June … I have therefore this morning written to President Tusk, the president of the European Council, informing him that the UK seeks an extension to the article 50 period until the 30th June… The government intends to bring forward proposals for a third meaningful vote. If that vote is passed, the extension will give the House time to consider the Withdrawal Agreement Bill. If not, the House will have to decide how to proceed.”

However, European Commission President Jean-Claude Juncker warned UK Prime Minister Theresa May in a phone call that short Brexit extension has to be complete before May 23. Or, UK will have to take part in EU elections. His spokesperson also said “the president has clearly warned the prime minister against including a date for the extension that will be after the European parliament elections. That’s why he repeated in this call his advice, which he set out in his letter on March 11, that the withdrawal has to be complete before May 23, otherwise we risk facing institutional difficulties and legal uncertainty, given the European elections date.”