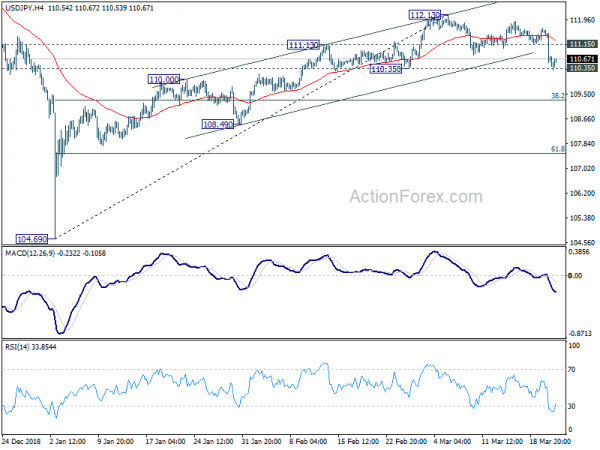 Dollar is trying to recover some of the steep losses triggered by much more dovish than expected FOMC economic projections. The greenback is now trading mixed for the day, and it’s indeed up against Sterling and Canadian for the week. Free fall in Germany yield is another factor lifting Dollar, with 10-year bund yield below 0.05 handle. Putting in to context, 10-year bund yield hit as high as 1.2 just two days ago. US stocks open flat in very tight range while 10-year yield stays pressured. We’d pointed out that yield curve between 3-month and 10-year is now on the brink of indicating recession. It may take some more time for investors to decide whether Fed’s dovish turn is positive or negative to the markets.

Back with the currency markets, Sterling suffering another round of selloff as UK Prime Minister Theresa May arrives in Brussels for the EU summit. For now, it’s uncertainty how she could get pass Commons Speaker Bercow to hold another meaningful vote for her Brexit deal, get the deal approved, and the secure short Article 50 extension within a week before March 29. Stronger than expected UK retail sales look irrelevant for traders for now. BoE and SNB rate decisions were also largely ignored. Canadian is the second weakest one, followed by Euro. New Zealand Dollar and Australian Dollar are the strongest ones.

Philadelphia Manufacturing Business Outlook jumped to 13.7 in March, up from -4.1 and beat expectation of 5. Prior month’s figure was the first negative reading in almost three news. For this month, new orders rose modestly from -2.4 to 1.9. Shipments index jumped 25 pts to 20.0.

BoE kept Bank Rate at 0.75% and asset purchase target at GBP 435B as widely expected. Both decisions were made by unanimous 9-0 vote. The central bank noted that economic data has been mixed since last meeting, but February Inflation Report projections “appear on track”.

Again, BoE noted that the outlook depend significantly on Brexit. And, the policy response to Brexit “will not be automatic and could be in either direction.

UK May in Brussels, emphasized Brexit is decision of the people

Arriving at the EU summit in Brussels, UK Prime Minister Theresa May repeated that Brexit delay is a “matter of personal regret”. However, “a short extension would give parliament the time to make a final choice that delivers on the result of the referendum.” Also, she emphasized again: “What matters is that we recognise that Brexit is the decision of the British people. We need to deliver on that. We are nearly three years on from the original vote. It is now the time for parliament to decide.”

Earlier today, German Chancellor Angela Merkel echoed the unified message from EU official regarding Article 50 extensions. She said: “There was a request from Theresa May] to delay the exit date to June 30. The leaders of the EU27 will intensively discuss this request. In principle, we can meet this request if we have a positive vote in the British parliament next week about the exit document.

May sent a letter European Council President Donald Tusk yesterday, requesting Article 50 extension until June 30. Tusk offered to give short Article 50 extension. But that would be “conditional on a positive vote on the withdrawal agreement in the House of Commons.” If his proposal is approved by all other 27 EU members, and there is a positive vote in the House of Commons next week, the EU can “finalize and formalize the decision on extension in the written procedure”. Tusk is ready to call for another EU summit next week if needed.

SNB left “expansionary” monetary policy unchanged as widely expected. Sight deposit rate is held at -0.75%. Three-month Libor target range is also kept at -1.25% to -0.25%. The central bank maintained the pledge to “remain active in the foreign exchange market as necessary, while taking the overall currency situation into consideration.”

While Swiss Franc has depreciated slightly since December meeting, SNB said “it is still highly valued” and the currency markets situation remain “fragile”. Thus, negative interest rate and the SNB’s willingness to intervene in the foreign exchange market as necessary therefore remain essential. These measures keep the attractiveness of Swiss franc investments low and reduce upward pressure on the currency.