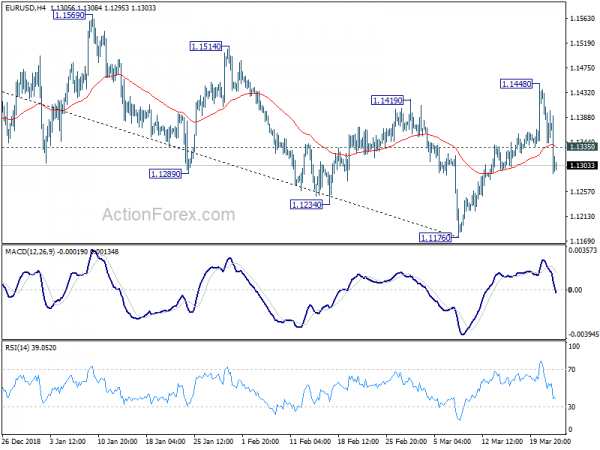 Fears of global recession intensify after shockingly poor German manufacturing data. Major European indices are all trading in red while DOW is down more than 100 pts at initial trading. More importantly, German 10-year bund yield turns negative for the first time since 2016. The most accurate indicator of US recession, 3-month to 10-year US yield curve, inverts, as 10-year yield drops through 2.5 handle. Risk aversion will likely be a major theme before weekly close.

In the currency markets, Euro is the weakest one today as selloff accelerates after German data. Canadian Dollar is the second weakest, suffering some pressure after poor retail sales data. Swiss Franc is the third weakest, as dragged down by Euro. Yen is the strongest one today so far on risk aversion naturally. Sterling is the second strongest for today, as supported by the two extra week of Brexit lifeline granted by EU. Dollar is the third strongest, mainly thanks to weakness elsewhere.

Chris Williamson, Chief Business Economist at IHS Markit said: “The survey indicates that GDP likely rose by a modest 0.2% in the opening quarter, with a decline in manufacturing output in the region of 0.5% being offset by an expansion of service sector output of approximately 0.3%… Most worrying is the plight of the manufacturing sector, which is now in its deepest downturn since 2013 as trade flows contracted at the sharpest rate since the debt crisis-ridden days of 2012.

Also: “Forward-looking indicators such as business optimism and backlogs of work suggest that growth could be even weaker in the second quarter… Any such further loss of growth momentum in the second quarter compared to the 0.2% GDP rise signalled for the first three months of the year would raise doubts on the economy’s ability to grow by more than 1% in 2019.”

Phil Smith, Principal Economist at IHS Markit said: “The downturn in Germany’s manufacturing sector has become more entrenched, with March’s flash data showing accelerated declines in output, new orders and exports. Uncertainty towards Brexit and US-China trade relations, a slowdown in the car industry and generally softer global demand all continue to weigh heavily on the performance of the manufacturing sector, which is now registering the steepest rate of contraction since 2012.

France PMIs: Contraction in both manufacturing and services

Eliot Kerr, Economist at IHS Markit said: “At the end of the first quarter, the French