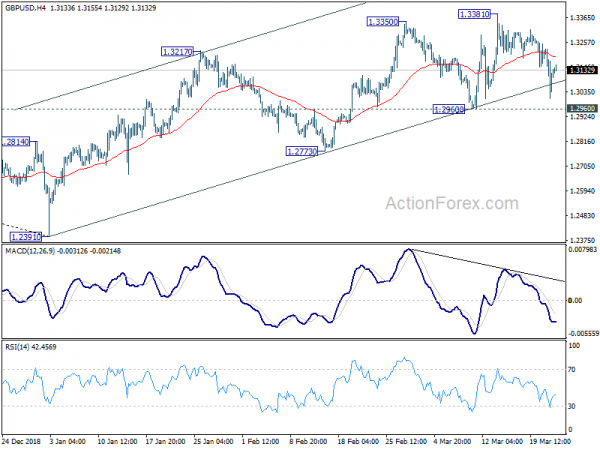 After some roller coaster rides, Sterling is trading broadly higher for today after EU approved a short Brexit extension for UK. But overall, the Pound remains the weakest one for the week. Delaying the “cliff edge” by two weeks is just giving the economy a breather. The problem is not solved and uncertainties remain. Nevertheless, focus will turn to economic data from Eurozone and Canada today first.

EU President Donald Tusk said “the cliff edge will be delayed”, adding that “I was really sad before our meeting, now I’m much more optimistic.” He also noted, until April 12, “all options will remain open” and “the UK government will still have a choice between a deal, no deal, a long extension or revoking Article 50 ”

May said after the summit that “what the decision today underlines is the importance of the House of Commons passing a Brexit deal next week so that we can bring an end to the uncertainty and leave in a smooth and orderly manner”. She added “tomorrow morning, I will be returning to the U.K. and working hard to build support for getting the deal through.”

Despite BoJ’s massive monetary stimulus, there is no sign for CPI core to achieve the 2% target. And even worse, it’s actually moving farther away from the goal. Sluggish core-core reading is providing no help too. Moreover, there are risks of drag by slowdown in overseas economy. For now, there is practically no case for BoJ to exit ultra-loose policy any time soon.

Eurozone PMIs will be the major focus in European session. Later in the day, Canadian data will take center stage with CPI and retail sales futures. US will release PMI, wholesale inventories and existing home sales.