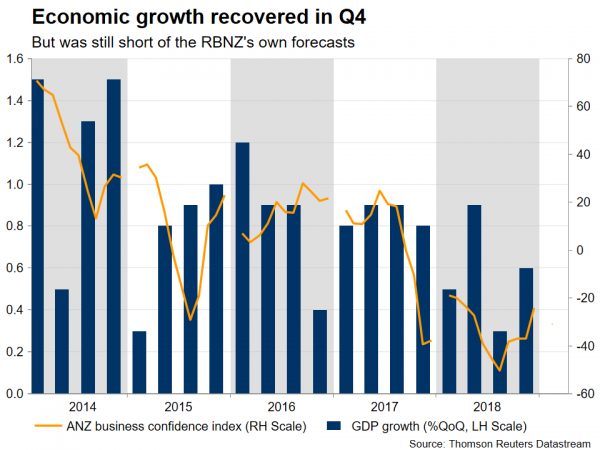 After a hectic week that saw the Fed officially abandon its rate-hike plans for this year and several developments in the Brexit saga, things could quiet down a little. The only major central bank to meet next week will be the Reserve Bank of New Zealand (RBNZ), while in the political arena, all eyes will remain on the UK as another Brexit vote could be held in Parliament. On the trade front, high-level talks will resume in Beijing.

In the UK, the final estimate of GDP for Q4 is due out, though that will almost certainly be overshadowed by Brexit developments. At its summit this week, the EU granted the UK a very short extension until April 12, which may be extended until May 22 conditional upon British lawmakers finally approving Theresa May’s Brexit deal. Otherwise, the UK will either leave on April 12 without a deal, or Britain will likely need to participate in the imminent EU Parliament elections and get a much longer delay of nearly two years. The UK Parliament is expected to vote on May’s deal again on Tuesday, but this has not been confirmed yet.

Where does this all leave the pound? In the near term, the risks surrounding the currency remain tilted to the downside, considering that UK lawmakers are highly unlikely to change their mind on the deal, which has not changed one iota since they last voted it down. Hence, leaving on April 12 without a deal is now the default path, and while that will most probably be avoided at the end, the mere fact this massive risk still lurks in the background is likely enough to keep sterling under pressure for now.

That said, as April 12 draws closer, any signs that the government will finally request a long extension could trigger a sizeable rebound in sterling, as the no-deal risk starts fading again and markets begin to focus on more positive scenarios – for instance another public vote over the next years.

RBNZ meeting: one for the bears?

In New Zealand, the calendar will be dominated by the RBNZ rate decision, early on Wednesday. No change in policy is expected, so all eyes will be on the language of the accompanying statement. The central bank surprised traders the last time it met, maintaining a broadly neutral tone despite a litany of worrisome developments, ranging from softness in the housing and labor markets to a slowdown in China – New Zealand’s largest export market by far.

Alas, economic growth in the final quarter of 2018 was weaker than the RBNZ had anticipated in its own forecasts back at that meeting, so policymakers could be a shade more dovish this time. To be clear, recent developments haven’t been disappointing enough for the overall neutral bias to change to a formal easing bias, but the Bank could nevertheless indicate that risks are accumulating, paving the way for an official shift in communication later on if data remain soft in 2019.

Another potentially important factor for the kiwi’s overall direction will be how the latest round of trade talks plays out. US Treasury Secretary Mnuchin and Trade Representative Lighthizer will visit China next week, and markets will be looking for a confirmation that progress is being made.

The US will be on the receiving end of several data points, starting with the final GDP for Q4 on Thursday. Growth is expected to be revised down to an annualized rate of 2.5%, from 2.6% in the previous estimate. Even though this would be a negative development, the caveat is that investors may view these data as outdated given that Q1 is now almost over. Not to mention that the Fed was already as dovish as it could possibly be at this stage, abandoning its rate-hike plans for 2019 altogether this week. The implication is that policymakers are unlikely to make any further changes to their stance for a while, and will certainly want to examine 2019 data before doing so.

In this sense, Friday’s releases may attract more attention. The core PCE price index and personal consumption figures for January are due out, alongside the personal income data for February. These releases are usually all for the same month, but the previous government shutdown is still complicating things, so income figures are being released ahead of everything else. Investors could focus mainly on those, as they are more up-to-date. On that front, the acceleration in average hourly earnings in February suggests that a solid personal income number may be in the offing.

In the euro area, the most noteworthy releases will be Germany’s Ifo business survey on Monday and the nation’s preliminary inflation data on Thursday, all for March. On the Ifo front, forecasts suggest a pullback in the current conditions index but an uptick in the forward-looking expectations print, which would keep the composite measure practically unchanged. Bearing in mind the disappointment in Germany’s manufacturing PMI for the same month, investors will pay a lot of attention to the Ifo prints, in order to either confirm or cast doubt on the narrative that Europe’s growth engine slowed further in Q1.

Meanwhile, the nation’s EU-harmonized CPI rate is projected to tick down to 1.6% in yearly terms, from 1.7% in February. While this seems discouraging, the pullback could be owed mainly to movements in energy pr