Risk Aversion Continues With Focus on German Ifo and Brexit 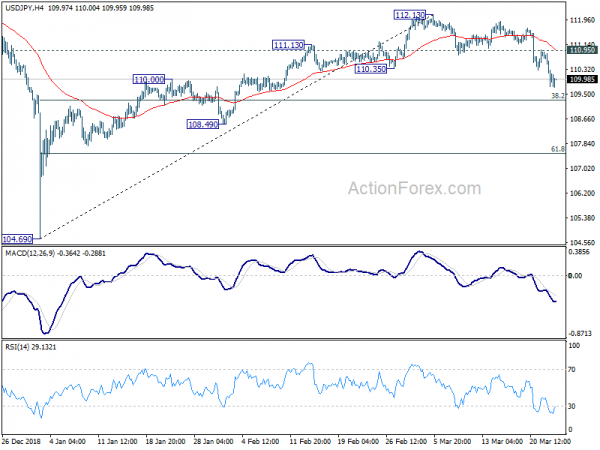 Risk aversion dominates in the Asian markets today as recession fears spread. But the currency markets are steady though. Major pairs and crosses are bounded inside Friday’s range at the time of writing, with mild weakest in Sterling and Swiss Franc. After last week’s poor Germany PMI manufacturing, investors will look into Ifo business climate today to gauge overall sentiments in the growth engine in Eurozone. Meanwhile, Brexit drama will resume in the Commons, after campaigns for second referendum gained momentum.

Technically, USD/JPY broke 110.35 support, EUR/JPY broke 124.27 support, CAD/JPY broke 82.41 support last week. All suggested near term bullish reversal in Yen. Yen crosses will be watched closely this week to validate this case. Levels to watch include 143.72 in GBP/JPY and 77.44 in AUD/JPY. Also, EUR/CHF’s steep decline last week raised the chance of medium term down trend resumption. Focus will be on 1.1173 low.

Chicago Fed President Charles Evans said at a conference in Hong Kong that he now doesn’t expect a rate hike until second half of next year. He noted the US economy is in a strong position. Fed funds rate is seen as close to neutral. And it’s good time to pause and be cautious. Yet, that’s a rather abrupt turn as just back in January, he expected Fed could hike as many as three times this year, assuming the economy remains reasonably strong.

Evans described the inversion of 3-month to 10-year yield curve as “pretty narrow”. But he also noted that there’s be a “secular decline” in long term interest rates. Some of his is “structural” having to do with “lower trend growth, lower real interest rates.” Hence, “in that environment, it’s probably more natural that yield curves are somewhat flatter than they have been historically.”

ECB Governing Council member Olli Rehn warned that the risks of no-deal Brexit are underestimated by the markets. Talking to Germany’s Die Welt newspaper, he said “in the short term Brexit is surely the biggest threat”. And, “financial markets seem to be too relaxed and appear to underestimate the risk.”

On Eurozone economy, Rehn said “growth has indeed slowed down significantly and we must be worried about the economy.”

Brexit debate will resume in the House of Commons today to find a majority for a way forward that breaks the current impasse. Prime Minister Theresa May said she hopes to hold a vote on her deal again this week. But so far, there is no signs the twice-defeated deal could make a turnaround. Instead, May could unveil plans to hold indicative votes.

The push for second referendum gained momentum over the weekend with with over a million people joined the “Put It To The People” March in London. Speakers at the rally included Labour’s deputy leader Tom Watson, Scotland’s First Minister Nicola Sturgeon, London Mayor Sadiq Khan. Separately, the “Revoke Article 50 and remain in the EU” petition now gathered over 5.3M signatures.

It appears that Chancellor of Exchequer Philip Hammond doesn’t object to a referendum. He said: “I’m not sure there’s a majority in parliament in support of a second referendum… Many people will be strongly opposed to it, but it’s a coherent proposition and it deserves to be considered along with the other proposals.”

However, Brexit Minister Stephen Barclay warned that “at its logical conclusion, the risk of a general election increases because you potentially have a situation where parliament is instructing the executive to do something that is counter to what it was elected to do.”

Meanwhile, the Sunday Times  reported that 11 unidentified senior ministers could try to oust May today as she has become a toxic and erratic figure whose judgment has “gone haywire”. Two leading candidate Cabinet Minister David Lidington and Environment Secretary Michael Gove backed May though. Also, it’s reported that hardline Brexiteer including Jacob Rees-Mogg & Iain Duncan Smith demanded May to set a timeline to step done for get their support on the Brexit deal.

With short Article 50 extension granted by EU last week, if UK parliament could approve a deal, Brexit is delayed to May 22. If no deal is approved, UK will have to leave with no withdrawal agreement on April 12, or provide an alternative.

RBNZ is the only central bank that’s meeting this week. It’s widely expected to keep OCR unchaged at 1.75%. Recent developments have been pretty much in line with the central bank’s expectations. Thus, there is little reason for its to change its monetary stance. RBNZ will very likely reiterate: “We expect to keep the OCR at this level through 2019 and 2020. The direction of our next OCR move could be up or down.” BoJ will provide another central bank activity with release of March meeting summary of opinions.

Recession fear is the main theme in the financial markets now. Economic data, in particular from Eurozone, will be closely watched. Germany Ifo business climate, CPI flash retail sales and unemployment will catch most attention. US consumer confidence, personal income and spending will be watched too. Though, US and UK Q4 GDP final will likely be ignroed. Canada GDP is another piece of market moving data.