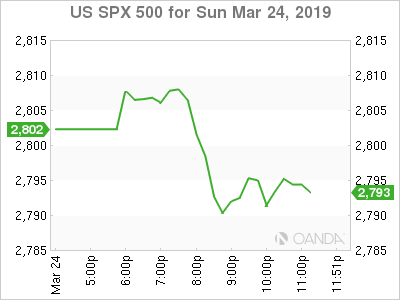 The dollar is higher in the Asia session after US Attorney General said the Muller report did not find sufficient evidence against President Donald Trump. Safe havens retreated slightly but will be on hand as another week filled with risk events begins.

The U.S. Federal Reserve went full dove, leaving no interest rates hikes in 2019 as per the dot-plot published as part of the end of March’s FOMC meeting. Global growth has failed to regain momentum as US-China trade and Brexit concerns have been joined with disappointing indicators out of Germany.

An inversion in the 3 month and 10-year yields has investors worried that a recession could be near. Fed Chair gave a mixed outlook where the central bank will be on pause this year but trying to maintain a positive long-term outlook.

Global stocks are under pressure at the start of the week. Fed members will be on board to reiterate that the central bank will not lift interest rates in 2019, but geopolitical risk events are still pressuring equities as the inversion in the short- and long-term US benchmark yields has increased investor anxiety as it could signal a recession.

Apple will kick off the week with its much-anticipated event on Monday. The fact that the company built up the event by announcing updates to its iPad, iMac and Air Pods has investors anxious on the March 25 event. The subscription service might be the worst kept secret in the market, but the devil is in the details and if Apple confirms rumours of quality content partnerships it could create a complete package as Tim Cook has put together a media, software and hardware package that will be tough to beat.

Gold is flat at the start to the Asian session; the rebound of the dollar is keeping the yellow metal under pressure until geopolitical risk events trigger a rise in demand. Brexit is high on the agenda, as Prime Minister May came back to the UK with an extension on hand but might need more to get Eurosceptic MPs to her side.

May’s tenure as Prime Minister could be short lived, but even potential candidates to replace her backed her as a change of leadership at this point in time could be disastrous as the Brexit countdown was expanded but marches on with a lot of work still on the table in order to rule out a no-deal exit.

Gold is set to make another run for the $1,350 price level that has proved resilient. Volatility fuelled by uncertainty and with plenty of Fed speakers expected to reinforce the dovish rhetoric from the central bank the US dollar will be limited on the upside.

Energy prices are lower on Monday as the US dollar rebounds after the comments from the US Attorney General removed some uncertainty surrounding the White House. Oil rose after a surprise 9.6 million drawdown and the efforts of the OPEC+ to keep production lower.

The cancellation of the April ministerial meeting pushed the focus to the end of the agreement in June, when a probable extension could be announced as the de facto leaders Saudi Arabia and Russia have hinted that the deal could still be in place until the end of the year.

The demand for energy continues to gather steam, even as global growth forecasts have been downgraded as mixed economic indicators and trade disputes impact investor confidence.

Oil markets continue to seesaw between the two main factors driving prices: US production and the OPEC+ agreement to cut output with disruptions such as the shock US drawdown tipping the scale in favour of a rise in prices.