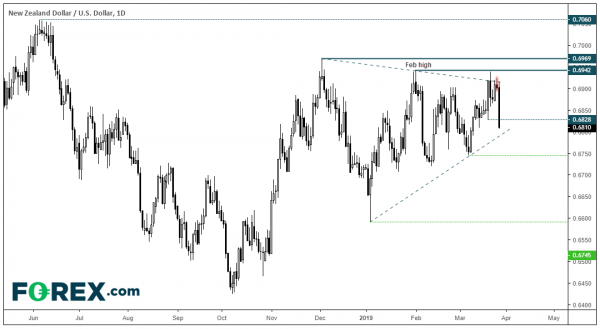 Stating that the next OCR direction is likely to be down, RBNZ crunched their way out of neutral gear whilst NZD bulls burned rubber and headed for the exit.

Summary of the March statement:

RBNZ tend not to mince their words and today’s overtly dovish statement is no exception. By spelling out the next rate direction is likely a down, traders are now doing their work for them by driving their currency lower. We continue to believe that May could be a live meeting as this is when the newly formed MPC (Monetary Policy Committee) hold their first meeting. Regardless, NZD bulls are rushing for the exit whilst bears rush back to the table.

NZD/USD: Currently within its most bearish session in 7-weeks, the February highs have proven to be too tough of a nut to crack. Still, the daily chart remains within a larger coiling formation and downside could be limited if USD follows its seasonal tendency of sustaining losses through April. Still, we’d want to see a clear break of the January trendline before assuming a larger, bearish follow-through.

AUD/NZD: Amidst its most bullish session in 2-months, today’s break higher confirms a bullish wedge breakout. If successful, the pattern projects a target near the base of its pattern around 1.0670, although structural highs around 1.050 and 1.055 make likely interim resistance areas. Support resides around 1.0370, although momentum shows no signs of testing it today.

EUR/NZD: After a false breakout yesterday, mean reversion is playing out. Although it’s debatable as to whether one would want to fade into this rally, given the shift in sentiment against the NZ dollar. For now, we’ll see how price action develops and await developments from Europe. It’s possible it could remain within a choppy range and retain its series of lower highs. Although, if weak data has troughed for Europe, then we should remain open-minded for a bullish break. One to watch.