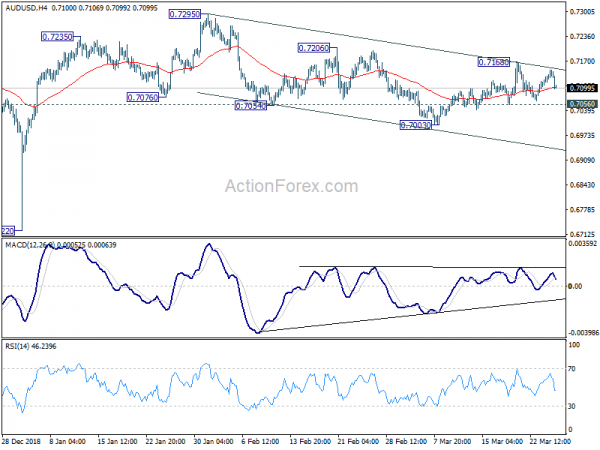 Selloff in New Zealand and Australian Dollar is the main theme in Asian session today. Kiwi plummets after RBNZ stands pat and indicates that the next move is a cut. After that, a full RBZN cut in priced in November but there are speculations on as early as a May cut. At the same time, RBNZ’s dovish seems to be adding to the case for RBA to cut twice this year too. For now, more downside are expected in both currencies for the near term.

Meanwhile, Yen and Dollar are the strongest ones, followed by Euro. The greenback is partly helped by weakness in other major currencies, and rebound in stocks overnight. But upside of Dollar is capped by yield curve inversion so far. 10-year yield dropped for another day to 2.414 overnight and 2.4 handle now looks vulnerable. Inversion with 3-month yield (now at 2.464) will only get worse before getting better.

Technically, EUR/USD’s fall from 1.1448 resumed by breaking 1.1273 temporary low and it should be heading to 1.1176 key support level. EUR/CHF also resumed fall from 1.1444 but it’s trying to draw support from key support zone at 1.1154/98. Sterling will be a key so focus today and Brexit alternative votes loom in Commons. It’s so far stuck in range against Dollar, Euro and Yen. 0.8474 support in EUR/GBP is the level to watch for Sterling strength. 1.2960 in GBP/USD and 143.72 in GBP/JPY are the levels to watch for Sterling weakness.

New Zealand Dollar dives sharply after RBNZ kept OCR unchanged at 1.75% and shifted to a clear dovish stance. It now expected that “the more likely direction of our next OCR move is down”.

In the statement, it also noted that balance of risks to the outlook has “shifted to the downside”. At the same time, risk of a “more pronounced global downturn has increased”, and ‘low business sentiment continues to weigh on domestic spending.” Though, on the upside, “inflation could rise faster if firms pass on cost increases to prices to a greater extent.”

Markets are raising bets of an RBNZ rate cut this year. A cut it full priced in for November and there speculations that it might happen as soon as in May.

Fed Daly: Patient until data suggests we go one way or another

San Francisco Federal Reserve President Mary Daly said yesterday that “patience is where I’m at right now,” regarding monetary policy. She added the US economy is in “a good place”. And interest rates should be left unchanged “”until the data suggests we go one way or another way.”

Though, she predicts that unemployment rate at 3.8% will eventually push wages and prices upward. And “it’s just taking a longer time than it typically does”. She noted “that’s part of what feeds into my patient strategy.”

Daly supported Decembers rate hike when the economy was growing at a faster rate. Now, she noted interest rates are at “neutral” and thus, patience is  “the way to go, because you don’t want to guess that you need to do more, or guess that we need to do less, you just want to be patient and look at the data.”

China’s industrial profits in January-February period slumped -14.0% yoy to CNY 708B. It’s the biggest contraction since 2011. National Bureau of Statistics (NBS) said the contract was mainly due to distortions caused by the timing of Lunar New Year.

Meanwhile, there were notable declines in profits in auto, oil processing, steel and chemical industries. Ex-factory prices of Auto, oil processing, steel and chemicals dropped -0.4%, -1.3%, -2.5% and -2.3% respectively. Profits dropped CNY 37B, CNY 32B, CNY, 29B and CNY 19B respectively. Combined the contributed to -14.2% contraction in profits. Excluding them, industrial profits rose 0.2%.

While the set of data is largely ignored by the stock markets, it’s putting some more weight to the upcoming round of trade talks. US Trade Representative Robert Lighthizer and Treasury Secretary Steven Mnuchin will visit Beijing on March 28-29. Even though an eventual trade might might not help reverse the slowdown in China, at least, the drag on exports will likely be eased.