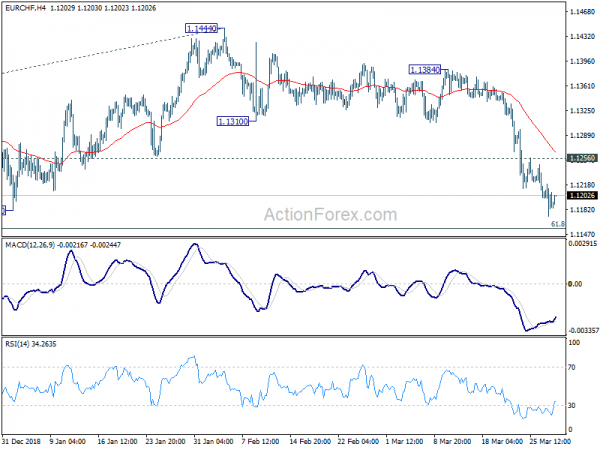 The forex markets are relatively quiet as quarter end approaches. Sterling remains stuck in range as Brexit stalemate continues. The UK Parliament continued to tell the world what they don’t want regarding Brexit, but not they really want. Meanwhile, US-China trade talks are resuming in Beijing today. There are reports of unprecedented progress in the negotiations. Yet it remains uncertain when the deal would be reached, or whether it could be. Treasury yields extended recent decline with US 10-year yield firmly taken out 2.4 handle overnight. US yield curve inversion continue to worsen but there is no clear responses from the stock markets yet.

Technically, Euro will be an interest currency to watch today. Other than New Zealand Dollar, Euro’s weakness is most apparent. Recession worries, falling treasury yields and Brexit stalemate are all playing a part. EUR/CHF is now pressing key support level 2018 low at 1.1173 after recent extended decline. Decisive break there will resume larger down trend from 1.2004. EUR/JPY is pressing 123.82 minor support. Break will resume the fall from 127.50 and solidify near bearish reversal for 118.62 low. EUR/GBP recovered just ahead of 0.8474 support but looks vulnerable to break to resume medium term down trend. EUR/USD’s fall from 1.1448 is also in progress for 1.1176 low.

The UK Parliaments once again expressed what they don’t want about Brexit, without saying what they want. With April 12 cliff-edge looming, there is still no sign of a breakthrough.

All eight Brexit alternatives were defeated in the UK House of Commons on Wednesday. That means no majority emerged support any options including no deal, a referendum, a customs union and a Norway-style deal. The closet results was for a “permanent and comprehensive UK-wide customs union with the EU”, which was voted down by 264 to 272. The call for confirmatory referendum was voted down by 268 to 295.

Meanwhile, Prime Minister Theresa May offered to resign if her Brexit deal gets approved by the parliament in a third meaningful vote. She told the Conservative 1922 Committee that “I know there is a desire for a new approach – and new leadership – in the second phase of the Brexit negotiations, and I won’t stand in the way of that.” She added “I am prepared to leave this job earlier than I intended in order to do what is right for our country and our party.”

With May’s offer, more hard-line Brexiteers turned to support her deal. A key consideration is that the change in leadership for the most important of next phase in negotiations. Trade negotiations and futures relationship will be on the line, which Brexiteers would be eager to get a firmer control on. However, it remains uncertain how May could get enough votes as Northern Ireland’s DUP repeated its objection to the deal.

Kansas City Fed President Esther George said in a speech that weakness in Q1 growth could reflect “transitory factors” such as the government shutdown, financial volatility, an unusually harsh winter, and heightened policy uncertainty. But over the medium term, the “generally positive outlook” of the US economy has “several prominent downside risks”.

The biggest risks come from slower growth abroad, “particularly in China, the euro area, and the United Kingdom.” Together with waning fiscal and monetary stimulus, they “represent a stronger headwind” then George’s baseline forecast. Right now, she noted that “data are noisy” and more time and evidence are needed to “separate the signal from the noise”.

US Trade Representative Robert Lighthizer and Treasury Secretary Steven Mnuchin arrive in Beijing  today for a new round of trade negotiations Ahead of that Reuters reported that there were unprecedented progress on a core issue in technology transfers.

Citing unnamed officials, it’s said that China’s proposals went further than in the past, which created hope for an eventual trade deal. The discussions on forced technology transfer covered areas that were not touched before, in terms of both scope and specifics.

Meanwhile, the texts of agreements moved forward in all areas even though they’re not where the US want to be. The areas are believed to include forced technology transfer and cyber theft, intellectual property rights, services, currency, agric