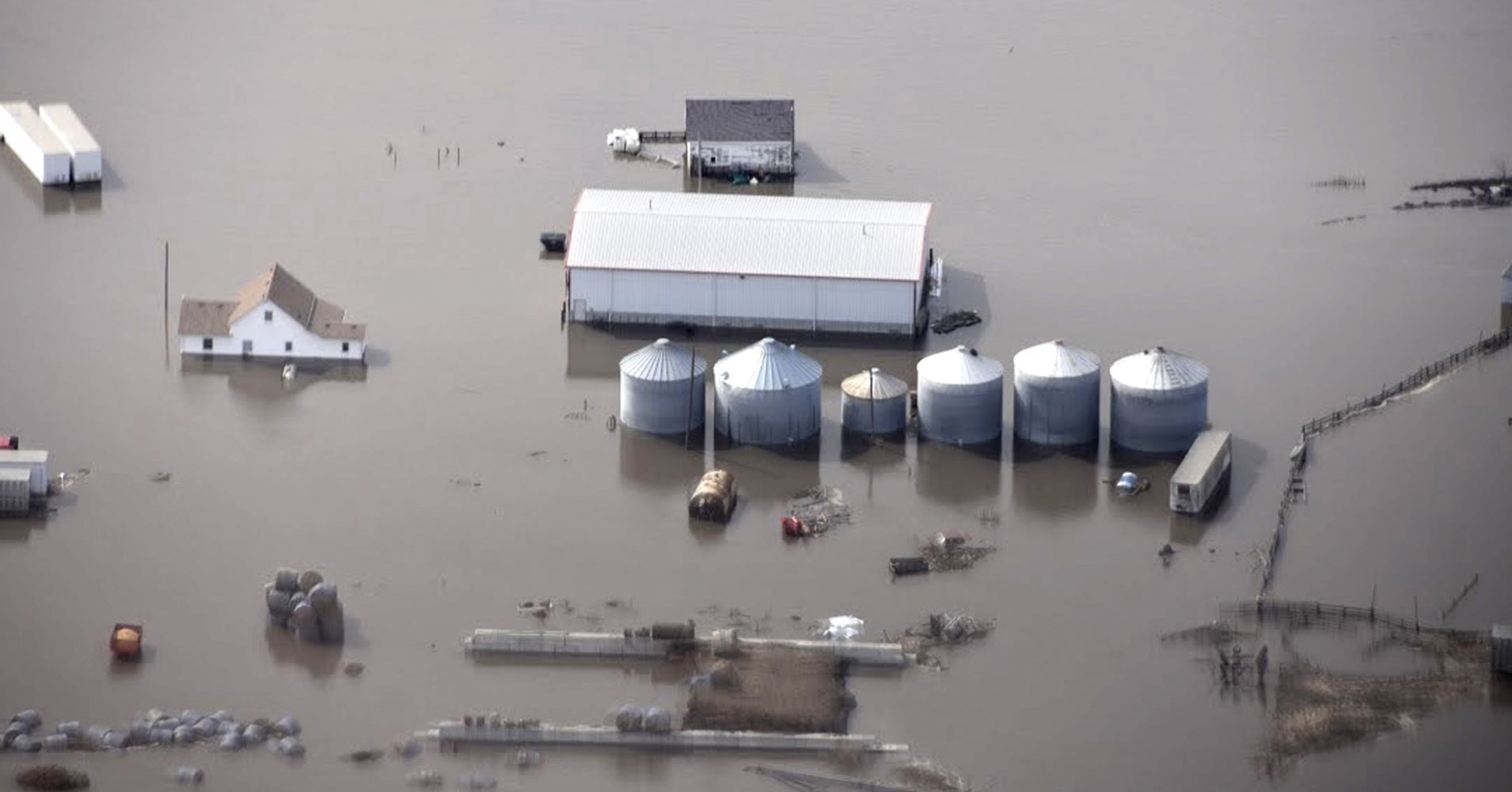 Record flooding in the Midwest and Great Plains caused at least $3 billion in damage to the region, and more than one-third of the tally is from agriculture, according to officials.

The states affected by the rapid snow melt and flooding include Nebraska, Iowa, Minnesota, South Dakota and Wisconsin. More rain is forecast to hit portions of the Midwest into Saturday that could exacerbate flooding issues.

A costly cleanup awaits the Farm Belt states as the flooded Mississippi River continues to recede. Forecasters predict portions of the river could remain high well into the middle of May.

Nebraska suffered nearly $1.4 billion in projected damage, according to state officials. Of the total, damage to agriculture is estimated at about $900 million, including crops, land and livestock, according to Steve Nelson, president of the Nebraska Farm Bureau.

Nelson said farmers and ranchers in Nebraska lost hundreds of pigs and thousands of cattle, including calves.

“We’ve seen the water recede in a number of areas in the state of Nebraska, although there are certainly downstream areas that continue to have flooding taking place,” Nelson said. “Nearly every river and stream set all-time flood records.”

Nelson said farmers already faced tough times before the powerful storm and flooding hit the region, so he fears some will be forced to go out of business because of additional financial stress caused by the disaster.

“Farmers and ranchers are very resilient and will try to survive,” he said. “But they might figure out in a year or two that there’s just no way to come back from a loss like this.”

Some of the damage is to corn and soybeans that farmers had in storage this year as they ride out the U.S.-China trade war. One farmer in southwestern Iowa reported having flooded bins and grain valued at about $900,000.

According to Iowa officials, most of the grain exposed to floodwaters this month is not insured.

That said, farmers and ranchers with livestock deaths might be eligible to receive assistance from the U.S. Department of Agriculture’s Farm Service Agency. The department also provides loans to help producers recover from flooding.

Iowa’s governor projected the total impact statewide at $1.6 billion, including damage to more than 23,000 structures.

The initial estimate for Iowa’s agriculture-related damages is $214 million, according to Kelly Coppess, a representative for the state’s Department of Agriculture. “We’ll know more after the water recedes and farmers have the opportunity to assess their properties,” she said in an email.

Archer Daniels Midland, a major processor of agricultural commodities, said Monday weather impacts would cause negative pretax operation impact to the company of $50 million to $60 million for the first quarter.

On Thursday, crop protection and seed company DowDuPont warned first-quarter results would be negatively affected due to transportation disruptions in the Midwest region that “halted farming operations, limited the ability to deliver products to customers, and delayed pre-season application.”

The Senate this week debated a $13 billion federal aid package that includes money for the Midwest, but one sticking point has been President Donald Trump’s opposition to more funding for hurricane-battered Puerto Rico.

Earlier this month, the president issued major disaster declarations for severe storms and flooding in Nebraska and Iowa.

Flooding caused extensive damage to infrastructure, including rural roads, bridges and levees. The Army Corps of Engineers this week identified at least 52 breaches of levees on the Missouri, Platte and Elkhorn rivers.

“Areas where we’ve lost levees may not be able to be farmed because we’re going to have repeat floods until those levees are repaired,” said Brad Rippey, a meteorologist with the USDA. He said the crops affected are predominantly corn and soybeans.