April Optimism Could be Key Turning Point for Global Growth 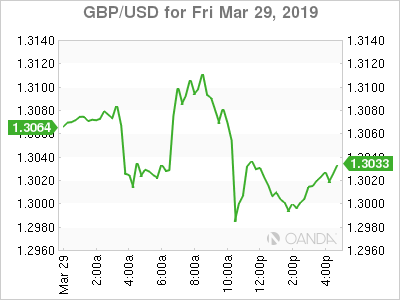 The US dollar climbed higher as markets balanced out global growth concerns along with optimism a trade deal was nearing between the two largest economies in the world. US economic data painted a mixed picture with the earlier data in the week confirming slowdown worries. The focus is expected to shift away from the 3-month/10-year yield curve inversion as April data is expected to show signs the economy is stabilizing or possibly rebounding. Trade optimism is also growing as Chinese Vice Premier Liu He will resume talks with US officials in DC on Wednesday. With accommodative stances firmly cemented by most of the major central banks, any improvements to the global outlook could help drive a high-beta rebound.

Normally, after three strikes you are out! But PM May seems determined to ram through a deal so the UK can avoid taking part in EU parliamentary elections in May. May suffered a third defeat on her stripped-down withdrawal agreement. The margin of defeat has steadily improved from a historic 230 votes, to 149, and on Friday she lost by 58 votes. The third defeat raises bets that we will see a general election, complicating the UK’s attempts to finalizing a divorce agreement with the EU. Monday’s indicative votes may see a customs union be agreed upon in Parliament.

The base case is for UK to get a long extension and on Monday we will see lawmakers try to figure out options for a Plan B. The risks of a no-deal exit or an election are growing and those options would likely be the most bearish for the British pound.

The Australia dollar volatility should pickup ahead of a busy week that will see a rate decision, the annual budget release and announcement of elections. Expectations are high for the RBA to deliver a rate cut this year, especially after they witness their own yield curve inversion. Unlike the US, Australian 3-month/10-year yield curve inversions are more frequent and recent history shows six out of seven inversions saw rate cuts.

The release of the Australian budget is expected to snap a long streak of deficits. Economists expect a budget surplus of A$4.6 billion in the year through June 2020, the first since 1970. The last time Australia saw a surplus was right before the financial crisis in 2008.

Later in the week, expectations are high for elections to be called, something we have been seeing frequently in Australia. They have seen six prime ministers over the last 9 years, and current polls have Labor opposition’s Bill Shorten in the lead.

West Texas Intermediate crude had a great quarter that saw price recapture the $60.00 a barrel level, the first time since early November. The recent rise stemmed from growing optimism on global growth and continued declines with US rigs. April optimism is high for US and China data to recover and that could be a key spark for the demand side argument for higher prices.

Regarding production cuts, OPEC + has been very effective in stabilizing prices and if we continue to hear supportive comments from Russia, prices could remain well supported. OPEC has punted the April Extraordinary meeting till after the US makes their decision on sanctions with Iran and Venezuela. If OPEC fails to deliver a year-end extension, that could be straw that breaks this bullish rally’s back.

Stocks managed to still crush it this quarter, despite a yield inversion with the Fed’s favorite spread and heightened economic growth concerns. The rally is mainly attributed to accommodative monetary policy stances globally, expectations for growth concerns to stabilize and optimism China and the US will make a trade deal.

This was a very long earnings season and the next season is about to kickoff on April 11th. Expectations are for a soft quarter, but we could be in for a bullish surprise if we see trade war concerns ease. Earnings growth for the S&P 5000 index are eyed falling 3.3% when compared to the same period from a year ago. Weakness is heavily priced in and we could see strong reactions if we do get some more optimistic outlooks.

Once the Turkish controls are relaxed, we still could see the lira collapse. Regardless of the local Turkish election outcomes, investors may be quick to hit the sell button if Turkey abandoning faith in Turkish investments. The restriction of allowing foreign investors to sell the lira could prove to be damning in the future.

The Turkish economy is very weak, falling into its first recession in a decade and with inflation three times above the bank’s target range. If the elections see the public vote in line with the recent data, President Erdogan may lose control of some large cities and that could lead to calls for an early election. The next major election in Turkey is not for four years.