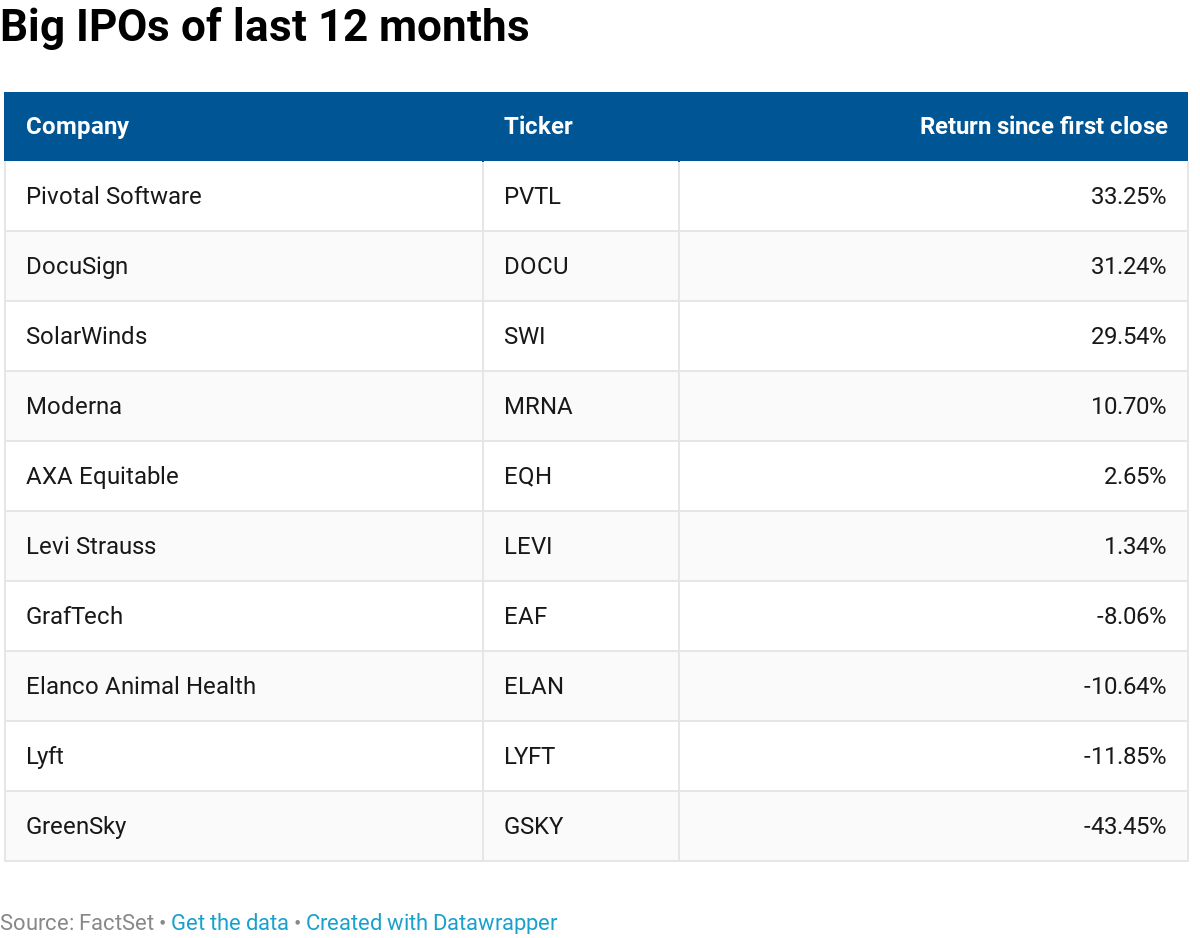 The ride share company’s freshly minted stock, after an initial surge, fell below its offer price on its second day of trading Monday, a warning that other hyped unicorns may have to be more conservative about their price in the initial public offering market.

Lyft fell 11.9 percent Monday, ending the day at $69. On Friday, it closed 8.7 percent above its $72 offer price on its first day of trading, but that was well below its opening surge of 20 percent earlier that day. The stock was cratering as the overall market soared Monday, with the Dow, the S&P 500 and the Nasdaq, all rallying more than 1 percent. Analysts said Lyft was being left in the dust because the broader market of investors are skeptical about its offering price.

“What it shows is there are obviously a number of flippers and IPO valuation was probably stretched,” said Jack Ablin, chief investment officer at Cresset Wealth Advisors. “Investment bankers generally want to leave something for retail investors. Maybe in this case they didn’t I think they probably just gauged demand and drew an unrealistic trendline.”

Ablin said Lyft has come public in a stock market that is fully valued, but analysts said it is not bubbly like the when the IPO market was red hot before the tech bubble burst in 2000.

Ablin said Lyft is not the first high-profile IPO to make a splashy debut and then immediately trade under water. Facebook for instance, launched in 2012 at $38. On its second day of trading, it fell nearly 11 percent from its first aftermarket close, and was still trading below the offer price more than a year later. Facebook later went on to famously become a lead stock in momentum trade, FANG, and Monday it was trading above $168.

“It’s when companies are growing fast but losing a lot of money, and we don’t know when it’s going to stop. That means they’re really hard to value. A lot of the trading in Lyft had to do with that it’s popular,” said Kathleen Smith, a principal at Renassiance Capital, which manages ETFs based on IPOs. Smith said Lyft will be added to its Renaissance IPO ETF on Friday.

She said the market is still figuring out what the company is worth. “This is the public market saying we don’t think it’s worth what it was offered at. It’s going to take some time for this to be figured out. The result is probably good for investors, not so good for companies. So the IPOs that follow, it, particularly the money-losing unicorns, are going to be priced more reasonably,” said Smith.

The arrival of Lyft and Levi Strauss, another recent high profile IPO [still above its offer price] was viewed as a sign that the dormant IPO market could be picking up, and there’s a series of other high interest IPOs in the cue behind them. Ride-share rival Uber, Pinterest, Slack, Airbnb and Palantir Technologies are all expected to go public this year. Dow Jones reported Monday that Slack, valued at more than $7 billion, is expected to trade on the NYSE in June or July.

“When Facebook flopped out of the gate, it did freeze the IPO market for a month. I don’t see that happening here,” said Smith. Smith said 45 percent of IPOs are trading below their offer prices, and the average first day pops for IPOs has been 11.4 percent this year.

“What you want to see is the majority of them trading above their IPO price and that has been the case. It’s kind of normal to see that,” said Smith. But she added that the after-market returns on average this year have been negative 0.4 percent.

Smith said some ‘bread and butter’ companies that already make money are also going public. She said that includes companies, like Tradeweb which is pricing shortly, and she expects those with actual profits to do fairly well.

“Maybe Uber will slow its deal down,” she said of Lyft’s bigger rival.

Analysts said Lyft’s trading is not a warning about the broader market, except in that Smith said investors are still wary after December’s sharp sell off even with the first quarter’s sharp bounce back.

“When you have a technical black eye like this, investors are going to remember it,” said Smith. “Even if it goes above the IPO price, technically it broke it. Nobody wants an IPO to break. What it means is every single shareholder lost money. The overhead resistance is very high. As you go back up and break through that, investors are going to say they’re going to get out now.”

Lyft is one of a handful of large IPOs that are trading below their first closing price after going public in the last 12 months. CNBC searched for firms that went public with market caps above $3 billion.

Elanco Animal Health was down 10 percent from its first day closing price, but Elanco, however, was priced at $24 and is still trading above the offer price, after surging 50 percent to $36 on its first day of trading. Pivotal Software and Docusign are both up more than 30 percent from their first market closes.

Bill Stone, chief investment strategist at Avalon Advisors, says he typically waits for the market to sort out the valuations.

“None of us would argue that the whole ride sharing business is not going to get bigger, but the question is can they make money at it?” said Stone. “I do think it’s its own story. We know they’ll probably continue to grow revenues. It’s just a question of when their earnings show up.”