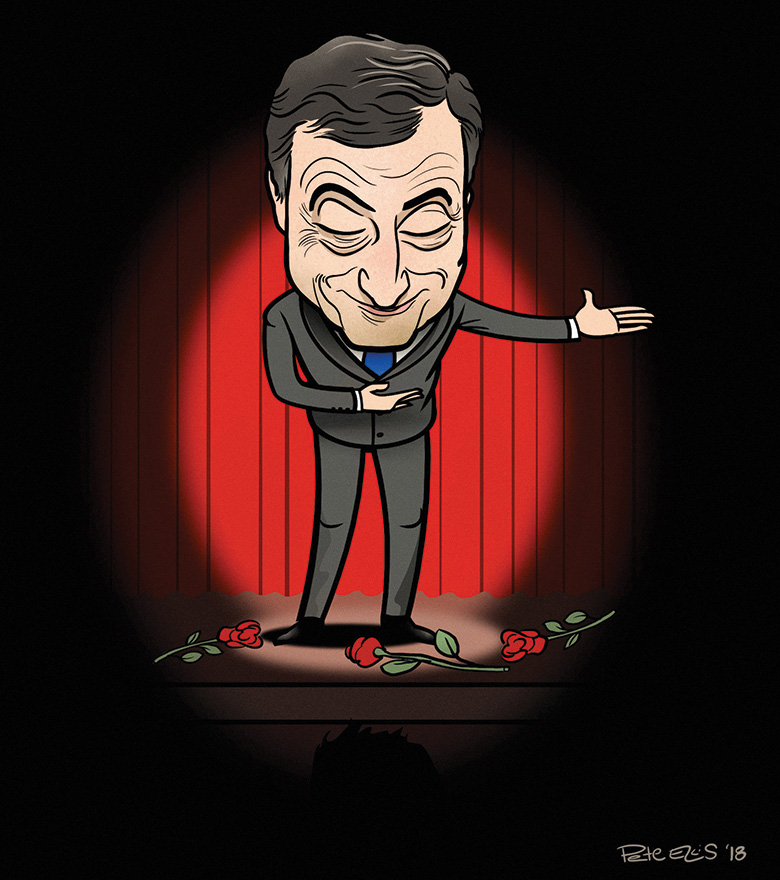 Draghi ended his last full year as ECB president with a performance that deployed his trademark adroit management of market expectations with choreographed policy changes.

He confirmed in a December press conference that expansion of the ECB’s quantitative easing (QE) policy of bond purchases would end on schedule in 2018, and that the central bank does not expect to raise key interest rates until at least the summer of 2019.

Draghi cemented his reputation as the Markets Whisperer by highlighting the “great uncertainty” facing economic growth prospects, which encouraged traders to hope that a rise in European rates may be delayed beyond the targeted start point of mid to late 2019.

He added that: “The monetary policy formulation that we have wants deliberately to keep optionality as a dominant feature” of its toolkit and stressed that asset purchases will not end with the termination of the expansion of quantitative easing, as redemptions will be reinvested.

The statement on optionality has important implications for the mechanics of the ECB’s intervention in bond markets and the extent to which it will be willing to provide support to sectors such as corporate credit in the likely event that borrowing conditions worsen in 2019 and 2020.

Analysts and soothsayers who compete to spot the source of the next global financial crisis have been warning about the risks of the corporate credit markets for some time. And there were certainly strains showing in the markets towards the end of 2018.

Access to debt capital markets ended earlier than usual, with many investment grade borrowers advised not to proceed with issuance soon after the global high-yield bond markets effectively shut down in late November.

Heavy outflows were seen from mutual and exchange-traded funds devoted to credit, and dismal year-end returns for most sub-sectors added to the general air of gloom.

Europe has seen more credit rating agency upgrades than downgrades in each of the last two years, in another contrast with the US, and one that argues for continuing very low corporate default levels. And European credit markets are less prone to the excesses seen in certain US areas such as leveraged loan and high-yield bond issuance, where covenant protection has been steadily eroded in recent years.

If Coeuré does come from behind to succeed Draghi, he is unlikely to attempt to engineer a swift comeback for QE features such as fresh purchases of corporate bonds

The combined effect of global trade wars and political instability in Europe could still cause a crisis in European debt issuance access in 2019, just as Draghi prepares to end his stint as ECB president in October and hand over the reins to a successor who is less experienced in calming market anxiety.

But there is also a chance that Draghi will be succeeded as ECB president by a supervisor who is prepared to continue his approach of endorsing unorthodox policy experiments to encourage the development of European capital markets, including corporate bond issuance.

A perception that Bundesbank president Jens Weidmann is the favourite to succeed Draghi has diminished in the last couple of months. Weidmann was an open opponent of Draghi’s policy of bond purchases. For a while there was an assumption that German acquiescence in quantitative easing would be rewarded with the succession to the ECB presidency.

That assumption is now being questioned.

Weidmann is increasingly viewed as simply having been wrong on QE and his inflexibility could make him a poor fit for the top job in an era that is unlikely to lack fresh challenges, ranging from Brexit to tension with core eurozone members such as Italy.

German chancellor Angela Merkel is also beginning her gradual disengagement from frontline politics, which may reduce the likelihood of a muscular push to insist that Weidmann succeeds Draghi.

That opens the door to another potential candidate, along with the start of a period of twists and turns in the succession stakes as various EU member states trade favours.

A well regarded candidate from a smaller economy might benefit from a compromise between bigger nations. That could elevate Erkki Liikanen of Finland or Irish central bank head Philip Lane.

Or a younger fellow French technocrat, ECB board member Benoît Coeuré, could emerge as the winning candidate.

Coeuré faces a hurdle to succeeding Draghi in the form of an appointments convention against promoting an incumbent ECB executive board member to president. That should not prove insuperable, however, and Coeuré’s role as the leading markets specialist within the ECB could boost his candidacy ahead of a period of potential instability.

Coeuré is not viewed as a slavish acolyte of Draghi’s policy of market support in pursuit of European integration and stability. He proposed ending the expansion of QE earlier than Draghi’s preferred date of December 2018, for example, although that may have been a calculated bid to demonstrate his independence.

Coeuré has hands-on experience running a borrowing programme from his days as head of debt management at the French Treasury and, since joining the ECB’s board at the beginning of 2012, he has played an active role in implementation of unorthodox market support policies.

He is also well regarded for his thinking on how technology will transform markets – including central bank policy transmission mechanics – and for a willingness to interact with private-sector specialists in banking and investing.

This interaction produced a rare stumble in his smooth ascent in May 2015, when he gave a speech at a conference for investors and economists that revealed a plan by the ECB to front-load QE market purchases before the summer trading lull that year.

Coeuré escaped censure because his comments were published almost simultaneously, and he is respected by markets professionals more for his understanding of trading mechanics than a hope that he will be an advocate for their narrow interests.

If Coeuré does come from behind to succeed Draghi, he is unlikely to attempt to engineer a swift comeback for QE features such as fresh purchases of corporate bonds.

But his flexibility and receptiveness to novel ideas on using markets to achieve central bank goals might still have an upside for industry participants – in a potential ‘Coeuré call’ effect, to adapt Draghi’s use of the word “optionality” to describe his preferred approach to the policy toolkit.

A ‘Coeuré call’ might not be quite as valuable as a ‘Draghi put’ that provides a backstop bid for bonds, but if corporate borrowing conditions become turbulent in the coming years then investors and bankers alike might take some comfort from the prospect of having a markets expert at the helm of the ECB.