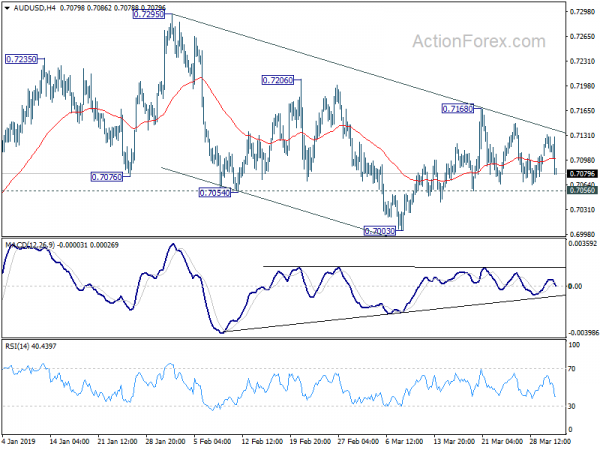 Australian Dollar trading broadly lower today after RBA kept interest rate unchanged. While there was no clear dovish shift, the statement suggests that RBA is starting to get ready for a move. Weakness in Aussie takes New Zealand Dollar lower too. Sterling is the third weakest so far after UK Parliament rejected all Brexit alternatives again. As for today, Swiss Franc is the strongest so far, followed by Yen and than Dollar.

Technically, one development is note is the EUR/AUD recovers strongly after breaching 1.5721 low, suggesting recent consolidation is probably extending. Though, Euro is mildly vulnerable as EUR/USD is heading to 1.1176 low. Break will resume larger down trend from 1.2555 and could prompt selloff in Euro elsewhere. US 10-year yield jumped to close at 2.497 overnight, just missed 2.5 handle. USD/JPY rode on this and is on track to retest 112.13 resistance.


RBA kept cash rate at 1.50%, no dovish shift but hints on data dependency

RBA left cash rate unchanged at 1.50% as widely expected. There is one very subtle change in the statement that’s picked up by the markets. Back on March 5, RBA concluded by saying “Board judged that holding the stance of monetary policy unchanged at this meeting would be consistent with sustainable growth in the economy and achieving the inflation target over time.”

In today’s statement, RBA said “the Board judged that it was appropriate to hold the stance of policy unchanged at this meeting. The Board will continue to monitor developments and set monetary policy to support sustainable growth in the economy and achieve the inflation target over time.”

That is, RBA added some development-dependency on monetary policy. That hinted RBA could be ready to move in economic data warrant so and interest rate might not stay there for long. Given that markets are expecting two cuts this year, RBA’s change in statement is a small step affirming this view.

There are little changes in other parts of the statement though. RBA noted that GDP data paint a “softer picture” of the economy than job data. It acknowledged the mere 0.2% growth in Q4 and 2.3% over 2018. It also noted that “growth in household consumption is being affected by the protracted period of weakness in real household disposable income and the adjustment in housing markets.”

Employment and inflation outlook are unchanged. RBA expects “continued improvement in the labour market is expected to see some further lift in wages growth over time”, gradually. Inflation is expected to pick up gradually over the next couple of years. The central scenario is unchanged for inflation to hit 2% in 2019 and 2.25% in 2020.

Sterling weakened mildly as the UK House of Commons, unsurprisingly, rejected all four Brexit alternatives in yesterday’s indicative votes again. The closest one to get a majority was Conservative MP Kenneth Clarke’s Customs Union option, which was defeated 276-273. The most voted one was Labour Peter Kyle’s Confirmatory Public Vote, which was defeated 292-280.

Brexit Minister Steven  Barclay complain in the Parliament after the votes that “this House has continuously rejected leaving without a deal just as it has rejected not leaving at all.” And he reiterated that ” the only option is to find a way through which allows the U.K. to leave with a deal.” He also noted “if the house were to agree a deal this week, it would still be possible to avoid holding European parliamentary elections.” It’s taken as a hint that Prime Minister Theresa May could put the thrice-defeated Brexit deal to a fourth vote this week.

According to the British Chambers of Commerce’s quarterly economic survey, found that key indicators of UK economic health weakened considerably in Q1. In particular balance of services companies reporting rise in exports sales dropped to lowest in a decade. Balance of firms reporting improved cashflow turned negative for the first time since 2012. Also, investment intentions in manufacturing and services were at lowest in eight years.

BCC Director General Adam Marshall said “our findings should serve as a clear warning that the ongoing impasse at Westminster is contributing to a sharp slowdown in the real economy across the UK. Business is hitting the brakes – hard.” Also, “the prospect of a messy and disorderly exit from the EU is weighing heavily on the UK economy, and must still be avoided”

Marshall also complained that “for too long Brexit tunnel-vision has distracted government from fixing the fundamentals to support growth here in the UK.”

European Commission President Jean-Claude Juncker complained the practices of the bloc’s “systematic rivals” in front of lawmakers in Germany yesterday. He said “Chinese companies have free access to our markets in Europe, but we don’t to the markets in China”, and “it can’t stay like this”.

Also, “one country isn’t able to condemn Chinese human rights policy because Chinese investors are involved in one of their ports,” Juncker added “it can’t work like this”.

Though, he’s not against China’s Belt and Road initiative “as long as the conditions are right”. He said, “if you don’t only meet Chinese workers on these construction sites but also European workers, then this is all feasible.”

BoC Governor Stephen Poloz sounded confident in his speech yesterday. He noted that Canada is adjusting the challenges in the domestic and global economies. And after taking into account the structural adjustments to oil prices, he said “we can see many area of encouraging economic growth”.

He added that the global economy is performing less well than expected and “Canada is feeling the effects”. Housing markets is also taking longer to “digest the combined effect of stricter mortgage guidelines and higher interest rates”.

However, Poloz said “recent economic data have been generally consistent with our expectation that the period of below-potential growth will prove to be temporary.”

Japan monetary base rose 3.8% yoy in March, below expectation of 4.4%. Australian building approvals jumped sharply by 19.1% mom in February versus expectation of -1.8% mom. Swiss will release CPI in European session. Eurozone will release PPI. UK will release PMI construction. Later in the data, US durable goods orders will be the main focus.