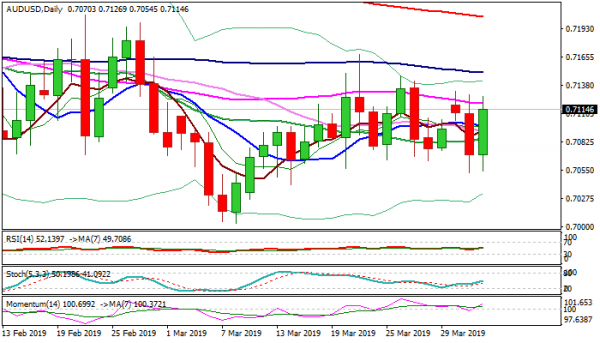 The Aussie dollar rallied strongly in Asian session on Wednesday, boosted by upbeat data (Australia’s retails sales Feb 0.8% vs 0.3% f/c and trade surplus widened in Feb to 4.80bn A$ from 4.35 bn A$ in Jan).

Fresh bullish momentum and break above a cluster of daily MA’s also contributed to bullish tone.


However, the price action on Wednesday remains within the range of previous day, as rally showed signs of fatigue at 55SMA barrier (0.7120) which caps the action since early Feb and marks solid resistance.

Failure to clear 55SMA would keep the pair within congestion but positive tone is expected to dominate while the price holds above 0.71 zone (converged 10/30SMA) that would keep focus on other key barriers at 0.7150/56 (100SMA / daily cloud top) violation of which would generate strong bullish signal.