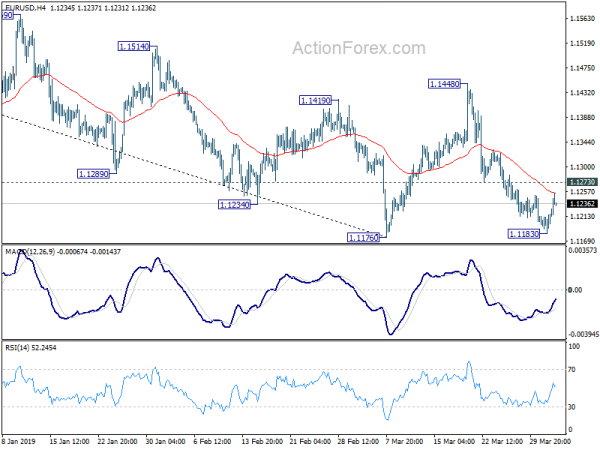 Risk appetite are generally firm globally today and it’s best reflected in Germany 10-year yield, which turns positive for the time in more than a week. It’s a rather clear indcation of a positive turn in overall sentiments. There is some optimism on US-China trade negotiations, which resume in Washington today. As a US Chamber of Commerce executive indicated, the deal is 90% done. But even if so, we’d agree that the last 10% if hardest and trickiest and there is still chance of either side walking out. Also, the softness in economic data, like the poor US ADP and UK PMI services, are unjustifiably ignored.

Technically, EUR/USD looks bottomed at 1.1183 for the near term, ahead of 1.1176 low. Immediate focus is back on 1.1273 minor resistance and break will push it higher to 1.1448. USD/JPY also lost momentum well ahead of 112.31 resistance even though Yen is broadly pressured. It looks like Dollar is turn soft, and will need some support from ISM services, and more so from Non-farm payrolls.

US ADP report showed 129k job growth in the private sector in March, well below expectation of 184k. That’s also the smallest job increase in 18 months. Prior month’s figure was revised up slightly from 183k to 197k.

Mark Zandi, chief economist of Moody’s Analytics, said, “The job market is weakening, with employment gains slowing significantly across most industries and company sizes. Businesses are hiring cautiously as the economy is struggling with fading fiscal stimulus, the trade uncertainty, and the lagged impact of Fed tightening. If employment growth weakens much further, unemployment will begin to rise.”

UK May to meet Corbyn on Brexit, but is anyone optimistic?

UK Prime Minister Theresa May is set to meet opposition Labour leader Jeremy Corbyn later today to find the much needed common ground to get a Brexit deal through the parliament. But so far, it seems no one is optimistic about the meeting.

Ahead of that, May said there are areas she could agree on with Corbyn, including leaving EU with a deal, jobs and ending free movements. Minister for Wales and government whip Nigel Adams resigned on May’s decision and she is increasing the risk of the “calamity of a Corbyn government.” Brexit Minister Steven Barclay said May is not handling a “blank check” to Corbyn and there is no precondition for the discussions with Labour.

Corbyn emphasized that anything agreed with May need to be put into law so that it is guaranteed for the parliament. pro-EU Labour lawmaker, Ben Bradshaw, warned that “it is clearly a trap designed to try to get May’s terrible deal through, which some people have fallen for, but Labour mustn’t.”

Scottish First Minister Nicola Sturgeon poured cold water and said the meeting would produce “an option that it won’t take too long for people to realize satisfies nobody, makes the country poorer and potentially could be unpicked by a new prime minister such as Boris Johnson.”

On the EU side, European Council President Donald Tusk said it was not certain how European leaders would view another request of delay from May. EU’s Economic Affairs and Tax Commissioner Pierre Moscovici said “If there is a no-deal scenario, new customs controls would have to be introduced… That does not mean we would systematically check every single… lorry… We would be controlling goods on the basis of risk analysis.”

UK PMI services dropped to 48.9, risk of sliding into a deepening downturn in coming months

UK PMI services dropped to 48.9 in March, down from 51.3 and missed expectation of 51.3. That’s the first contraction reading since July 2016. Markit noted slight reduction in service sector activity. New orders fall for the third month running in March. And, prices charged increase at the slowest pace since June 2017. All sector PMI dropped to 50.0, down from 51.4.

Chris Williamson, Chief Business Economist at IHS Markit said: “A drop in service sector activity indicates that UK GDP contracted in March, with the economy stalling over the first quarter as a whole and at risk of sliding into a deepening downturn in coming months. Both the services and construction sectors are now in decline and manufacturing is only expanding because of emergency stockpiling ahead of Brexit.

Also: “A stalling of the economy in the first quarter will therefore likely turn into a downturn in the second quarter unless demand revives suddenly which, given the recent escalation of Brexit uncertainty, seems highly improbable. Such a scenario leaves the current consensus forecast for the UK economy to grow 1.3% in 2019 looking far too optimistic. IHS Markit currently expects to see just 0.8% growth in 2019, and even this modest performance is perhaps somewhat hopeful given the recent lack of any Brexit developments.”

Chris Williamson said: “The final eurozone PMI for March confirms the sluggish end to the first quarter, with business growth ebbing to one of the most lethargic rates seen since 2014… At current levels, the PMI remains consistent with GDP rising by 0.2% in the first quarter, but unless manufacturing pulls out of its downturn the overall pace of economic growth will likely weaken in the second quarter as the malaise spreads to the service sector. In this respect, with forward-looking indicators from the manufacturing sector suggesting goods production will fall further in the coming months, downside risk to the outlook have intensified.”

Australia retail sales rose 0.8% mom s.a. in February, much higher than expectation of 0.3% mom. ABS Director of Quarterly Economy Wide Surveys, Ben Faulkner said: “There were improved results across most industries with rises in food retailing (0.8%), department stores (3.5%), household goods retailing (1.1%) and clothing, footwear and personal accessory retailing (1.6%). Other retailing (0.0% and cafes, restaurant and takeaway services (0.0% were relatively unchanged. The rise this month follows subdued results in December 2018 (-0.4%) and January 2019 (0.1%).”

RBA has repeatedly noted that household consumption is a key uncertainty for overall GDP. Tightness in labor market has not much been translated into wage growth and rise is household disposable income. Wealth effect of falling house price could also be a drag. But February data does give some positive news to RBA and some room for it to wait-and-see first.

Australia AiG service index rose to 44.8, but all sectors contract

AiG Performance of Service Index rose 0.3pts to 44.8 in March, indicating a “slower rate of contraction. But it’s still the third straight month of contractionary conditions following a positive run through most of 2017 and 2018. Despite the slight improvement, it’s should noted that it’s the first month since August 2010 that all sectors contract.

China Caixin PMI services rose to 54.4 in March, up from 51.1, beat expectation of 52.0. That’s the highest reading in 14 months. PMI composite rose to 52.9, up from 50.7, strongest since June 2018. Markit also noted that Manufacturers and service providers both signal stronger increases in activity and new work. Renewed rise in manufacturing payrolls leads to first expansion of composite employment for over a year. Overall business confidence edges up to seven-month high.

Zhengsheng Zhong, Director of Macroeconomic Analysis at CEBM Group said: “In general, China’s economic fundamentals recovered in March, with domestic and external demand as well as manufacturing employment improving. However, business sentiment has remained cautious, and inflation was subdued. The three-month moving average of the Caixin China General Manufacturing PMI remained in contraction territory, while the Caixin China Composite Output Index showed tentative signs of recovery following a relatively subdued start to 2019. More evidence is needed to determine whether the Chinese economy has stabilized.”

Intraday bias in EUR/USD remains neutral for consolidation above 1.1183 temporary low. Further decline is still in favor as long as 1.1273 minor resistance holds. Sustained break of 1.1176 low will resume whole decline from 1.2555. On the upside, however, break of 1.1273 support turned resistance will confirm short term bottoming. Intraday bias will be turned back to the upside for 1.1448 resistance instead.