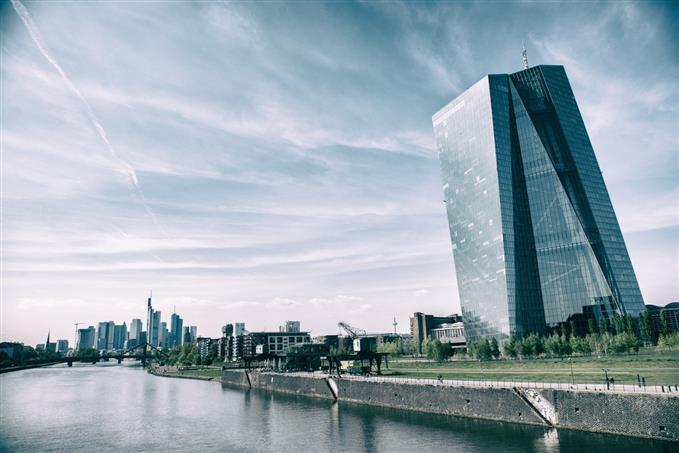 The European Central Bank (ECB) is situated in Frankfurt, Germany. It was established in 1998 by the Treaty of Amsterdam. The European Central Bank is different to other central banks in that it controls monetary policy for the entire eurozone. Countries that belong to the eurozone include Austria, Belgium, Cyprus, Estonia, Finland, France, Germany, Greece, Ireland, Italy, Latvia, Lithuania, Luxembourg, Malta, The Netherlands, Portugal, Slovakia, Slovenia and Spain.

What is the ECB

The European Central Bank’s primary objective is to maintain price stability. They use monetary policy to support the economy and job creation.

Key Economic Mandates of the ECB

The European Central Bank’s primary mandate or objective is price stability. Price stability is the control of inflation, Harmonised Index of Consumer Prices (HICP) and the exchange rate of the EUR.

1) Price Stability – which is price stability or inflation

2) Financial stability – Through the control of price stability and sometimes other mechanisms.

If inflation goes above 2%, the European Central Bank may signal a hiking of the interest rate to the public to tighten the eurozone’s economic expansion and bring down inflation. If unemployment numbers are increasing and the economy is slowing down, the bank may have to make the decision to decrease interest rates, to stimulate the economy and job growth. A period of rising inflation and increasing unemployment will require the policy makers to weigh the pros and cons of tightening the economy to reign-in inflation or stimulate the economy to produce jobs.

The European Central Bank also plays a large role in keeping the eurozone’s financial system stable. In times of a crisis they can do this by adding liquidity to the system, either by buying bonds on the open market or decreasing the interest rate to extremely low levels to help distressed debt holders pay back their obligations.

If the European Central Bank does not add liquidity in times of a crisis, the entire financial system could collapse.

Interest rate impact on the Euro

For example, if the European Central Bank keeps interest rates unchanged but issues forward guidance (tells the market) that they expect more interest rate hikes in future, the value of the Euro tends to appreciate.

A quantitative easing program (QE)has a similar effect to interest rates on the Euro. Quantitative easing is the buying of securities on the open market by a Central Bank in order to stimulate the economy and add liquidity to the financial system. Historically it has only been done in times of a financial crisis. Increased quantitative easing reduces the value of the Euro because it increases the amount of money in supply.

Interest rate impact on the economy

Lower interest rates stimulate an economy in a few ways:

The table below displays the possible scenarios that come from a change in interest rate expectations. Traders can use this information to forecast if the currency is likely to appreciate or depreciate and how to trade it.

Top Takeaways of the ECB and Forex Trading

Use the DailyFX economic calendar to keep an eye on all the important economic data releases, including central bank speeches and interest rate data. Don’t forget to bookmark our Central Bank Rates Calendar so you can prepare for regular announcements.

We also recommend finding out more about the role of central banks in the forex market, and central bank interventions involve.

If you are just getting started on your trading journey, get to grips with the basics of forex trading in our New to Forex trading guide.

Learn more about other central banks

Most central banks have similar mandates of controlling price stability and upholding financial stability, although there are some differences. Learn more about the different central banks: