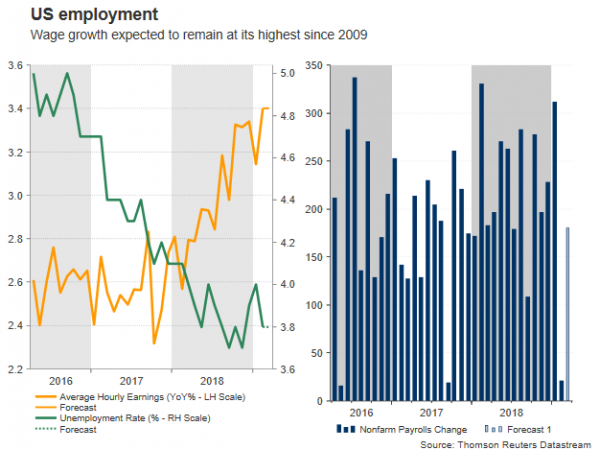 The US dollar shrugged off downbeat retail sales and inflation figures recently as business data surveyed by the ISM institute indicated that production, new orders and employment bounced up in the previous month, helping 16 out of 18 manufacturing industries to pick up growth. The data volatility is now extending to the end of the week when the March Nonfarm payrolls report is awaited by investors to reassess their outlook on the Fed’s frozen monetary tightening plans.

The Fed has dramatically lowered its interest rate projections to zero this year after raising them four times in 2018. Downside external risks from China and Europe as well as internal signs that the US economy could be at the end of its growth cycle put the central bank in safety mode and 2019 forecasts for two rate hikes to bed in early March, with policymakers relying on data developments to drive policy.

The economic evidence, however, has been mostly disappointing since the FOMC policy meeting as initial estimates for a weaker 2.6% y/y growth in the last quarter of 2018 were revised even lower to 2.2% last week, embracing the Fed’s dovish turn. The Core Personal Consumption Expenditures (PCE) Price Index, the main inflation tool policymakers use to adjust monetary policy was also a negative spot as the measure eased more than analysts anticipated and further below the 2.0% target. Personal consumption and income readings which accompanied the inflation report were not encouraging either; although they returned to growth, the rise did not match forecasts and was minimal, underlying the lack of spending confidence among households, something proved by the surprising negative retail sales prints in February as well.


While the latter could be partially attributed to delays in processing tax refunds, the US Jobs report scheduled for release on Friday at 1230 GMT could give some insights on whether the slowing in consumption, which accounts for more than two-thirds of the US economic activity, is a temporary incident or a downtrend in progress.

Still, analysts hope for a brighter employment report this time and therefore well-supported pockets in the household framework. Particularly, the US economy is said to have added 180k new job positions in private and public nonfarm sectors in March compared to the sluggish 20k increase registered in the preceding month, leaving the unemployment rate unchanged at 3.8%, the lowest in 19-years. Average hourly earnings are seen slightly weaker at 0.3% on a monthly basis versus February’s rise of 0.4% but year-on-year, the gauge is expected to hold the strongest in a decade at 3.4%, well above the inflation rate, boosting consumers’ real disposable incomes to mitigate a potential negative economic shock.

Nevertheless, the Fed is not willing to continue the rate hiking path unless wage growth translates to higher inflation. Markets are even more pessimistic, predicting a rate cut with a probability of 65% by the end of the year if trade talks between the US and China are prolonged without real results and EU-UK negotiations fail to deliver an orderly Brexit, hurting confidence in the global economy.

Another negative surprise in NFP numbers, would undermine the health of the US job market and bring down hopes for higher inflation, making a rate cut more likely. The US dollar could bear the disappointment, driving USDJPY closer to the 20- and 50-day moving averages (111-110.80), while the 110 level could be also eyed in case of steeper declines.

Alternatively, better-than-expected results may help USDJPY to reach its recent highs near the 112 mark on the increasing assumption that a tighter labor market could revive inflation pressures and therefore reduce chances for a rate cut. A bigger positive surprise may also lead the pair towards 112.50-113.