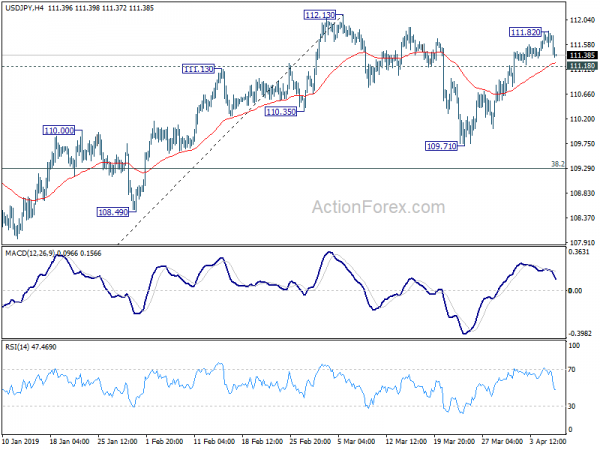 Yen recovers notably in Asian session today but the recovery is not strong enough to warrant a sustainable rebound yet. Meanwhile, Australian and New Zealand Dollar are generally pressured while there is no apparent sign of risk aversion. The economic calendar is not particular busy today with some second-tier data only. It may take more time for the markets to unfold the direction for the week.

The US-China trade negotiation last week ended with “guarded optimism” from White House economic adviser Larry Kudlow, without details of course. Focus is back on never-ending Brexit drama as April 12 deadline looms. EU-China summit in Brussels might catch some attentions but expectations are low. ECB meeting, US CPI and FOMC minutes will be more interesting to watch.

Technically, Dollar is turning slightly softer again today. EUR/USD is held comfortably above 1.1176 key support so far. And recovery could put focus back to 1.1273 minor resistance. Break will confirm short term bottoming. USD/JPY could also be heading to 111.18 minor support. Break will indicate rejection ahead of 112.13 resistance and suggest near term reversal. USD/CHF also bounced from 1.0010 minor resistance, which could prompt more selling.

Labour said May didn’t move an inch on Brexit red lines, while May urged compromises

Timing is ticking for the UK as April 12 Brexit day is approaching quickly. The talks between Prime Minister Theresa May and Labour leader Jeremy Corbyn yielded no results so far. Labour’s top legal policy chief Shami Chakrabarti complained that May has not moved “an inch” on her “red lines”. And, “it’s hard to imagine that we are going to make real progress now without either a general election or a second referendum on any deal she can get over the line in parliament.”

May, on the other hand, said in a video, apparently shot by shaky hands, that “ending free movement, ensuring we leave with a good deal, protecting jobs, protecting security” are things the Conservatives and Labour could agree on. And, she added “it’ll mean compromise on both sides” but “delivering Brexit is the most important things for us”.

With no cross-party agreement in sight yet, May would need EU’s approval on her request for extension until June 30 to avoid a no-deal Brexit. Comments from EU officials suggested that they’re against another short extension with no clear and substantial developments in UK. Even the idea of “flextension” was not accepted by all. Some expected that the most likely outcome of the EU summit this week is for May to come out with a long extension. But that will very likely infuriate hard-line Brexiteers in the Conservative Party.

BoJ Governor Haruhiko Kuroda maintained his view on the economy in a speech at a quarterly meeting of regional branch managers. He said Japan’s economy was expected to continue expanding moderately, even though slowdown overseas is affecting exports.

But for now, BoJ will continue to expand monetary base until consumer inflation exceeds 2% target stably. And, short- and long-term interest rates will be kept at current very low levels for an extended period of time.

In a CBS interview aired on Sunday, White House economic adviser Larry Kudlow said trade negotiations with China got “closer and closer”. He hailed that “we made good headway last week when Vice Premier Liu He was here.” And talks will continue this week with “a lot of teleconferencing”. He also added “a lot of very difficult topics for the first time are on the table and being resolved”. He has “guarded optimism, may- maybe more than guarded optimism so we’re- we’re gaining on it.”

But he emphasized: “In each and every place, (A) they’ve acknowledged their problems. That was a very big hurdle. And (B) what wasn’t on the table is on the table, and (C) we’re getting closer and closer.”

Low expectations on EU-China summit in Brussels this week

Chinese Vice Premier Li Keqiang will meet top EU officials in a summit in Brussels on Tuesday. Ahead of that Li wrote in German newspaper Handelsblatt, saying that China was ready to work closely with the EU on climate change, sustainable development, preserving the Iran nuclear deal and fighting terrorism. But China is only willing to exchange views on WTO reforms.

EU, on the other hand, is said to known to be concerned with the unfair trade practices with this systemic rival. In particular, there is no binding commitments from China in key areas, including inclusion of state subsidies on enterprises as part of WTO reforms. And European Council President Donald Tusk was said as objecting to a joint statement for the summit, as China has not delivered on key EU expectations and demands.

The expectations on the summit are generally low.

ECB, US CPI and FOMC Minutes to highlight the week

The most important events are scheduled for Wednesday this week. ECB will keep monetary policies unchanged, without a doubt. There shouldn’t be any chance in ECB’s plan on monetary policy too. That is, it will keep interest rates unchanged at least through the end of 2019. Details regarding the TLTRO III should be released later in June, rather than at this meeting.

Though, markets might be eager to know more on two topics. Firstly, March meeting minutes revealed that some members indeed favored to extend forward guidance until first quarter of 2020. President Mario Draghi would be asked to elaborate more on the discussions. Secondly, members’ comments over the past weeks have given rise to the possibility of a move to a “tiered deposit rate” system in order to save bank profitability.

US CPI and FOMC minutes will also be featured on Wednesday. Fed turned rather dovish at March meeting. Most importantly, members now project no rate hike in 2019 and just one in 2020. Also, the balance sheet run-off plan will end in September. The minutes will likely reveal more details on the the reasons behind the changes, as well as the balance of hawks and doves in the committee.

USD/JPY’s dip today suggests temporary topping at 111.82 again and intraday bias turns neutral. Another rise is mildly in favor as long as 111.18 minor support holds. On the upside, decisive break of 112.13 will resume whole rally from 104.69 and target 114.54 resistance next. However, on the downside, break of 111.18 will likely extend the consolidation from 112.13 with another fall to 109.71 and possibly below, before completion.