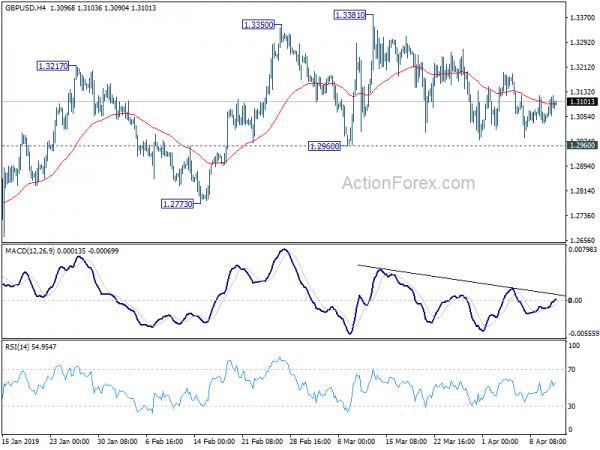 Sterling is given a mild lift after EU grants UK Article 50 delay till October 31. Even though it’s still uncertain how Prime Minister Theresa May could get the Withdrawal Agreement through the parliament, the cliff-edge is at least pushed for nearly six months. The Pound is, after all, staying in familiar range without any direction.

Dollar is mixed for now after FOMC minutes solidified Fed’s patience stance. It’s a consensus among policy makers Fed will stand pat for the rest of the year. Inflation is close to target without little sign of heating up. Fed indeed has a lot of room to keep interest rates at current level for longer. At the same time, several members noted their openness to rate cut should development warrants it. It could depend on how the risks play out.

Euro is mixed too. The dovish ECB meeting yesterday triggered some knee jerk reactions. But the common currency quickly found its footing. Yet, Euro could be vulnerable to another selloff as Trumps looks determined to escalate political and trade tensions with the EU. In a tweet, Trump blamed EU for being “tough” on the UK and Brexit, just after they approved a “flexible” extension that UK could leave any time. And he condemned that EU is a “brutal trading partner” with the US.


For the week, Aussie is the far the strongest one, followed by Yen. While risk aversion is not apparent, both seem to be lifted by falling treasury yields elsewhere. US 10-year yield is back at 2.477 while Germany 10-year yield is negative. There was no extra bearish development in Australia to push RBA to deliver a rate cut yet. Swiss Franc is the weakest one, thanks to rally in oil prices. Dollar follows as second weakest.

Minutes of March 19-20 FOMC meeting released overnight solidify Fed’s patience stance. Additionally, the minutes indicated that some members are open to rate cut if incoming data and development warrant so.

It’s noted that a “majority” of participants expected that evolution of economy and risks would likely warrant leaving interest rate unchanged for the rest of year. Some of them noted current interest rate was “close to” neutral.

At the same time, participants continued to “emphasize” decisions at coming meetings would depend on their ongoing assessments of the economic outlook and how risks evolved. “Several” participants noted their view on interest rate “could shift in either direction based on incoming data and other developments.”

EU agreed to give UK flexible Brexit extension at the special European Council meeting on Wednesday. The extension should last “only as long as necessary and, in any event, no longer than October 31 2019”. If the Withdrawal Agreement cannot be ratified by then, Brexit will take place on November 1. During the extension, UK remains a EU remember with full right, and has a right to revoke Article 50 at any time.

In the statement, EU emphasized that “the extension cannot be allowed to undermine the regular functioning of the Union and its institutions.” UK must hold European Parliament elections if it’s still a EU member on May 23-26, or Brexit will happen on June 1. Also, EU reiterated there will be no renegotiations. And, the extension “cannot be used to start negotiations on the future relationship”. Though, EU is open to reconsider the Political Declaration.

In the post summit press conference, European Council President Donald Tusk said “this extension is as flexible as I expected, and a little bit shorter than I expected, but it’s still enough to find the best possible solution.” He urged UK “please don’t waste this time”.

German Chancellor Angela Merkel said: “We looked at the matter and decided to shift the date to October. We want an orderly exit of Great Britain and an orderly exit of Great Britain can be best ensured if we give it some time”. And, “the decisive point was when will the British parliament consent to the withdrawal agreement and we made it clear that that exit agreement applies and will not be changed”.

French President Emmanuel Macron said: “It’s true that the majority was more in favor of a very long extension. But it was not logical in my view, and above all, it was neither good for us, nor for the UK.” And, “I take responsibility for this position, I think it’s for the collective good.”

Looking ahead: Germany CPI, Canada new housing price index, US PPI and jobless claims will be featured. A number of Fed officials will speak today, including Clarida, Williams, Bullard and Bowman.