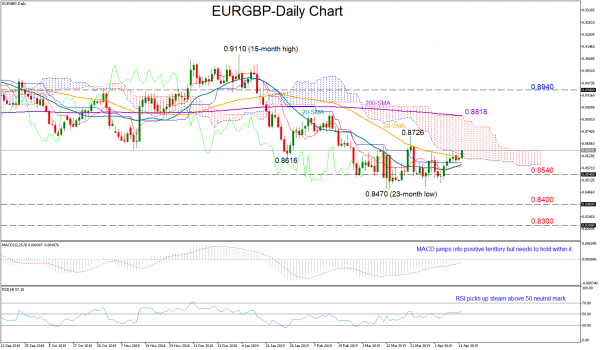 EURGBP jumped above the 50-day simple moving average (SMA) and into the Ichimoku cloud on Friday for the first time since the start of the year, raising hopes for further improvement. The momentum indicators comply with this view as long as the RSI keeps increasing speed to remain above its 50 neutral mark and the MACD holds in positive territory.

Still, for a longer-lasting rally in the near term, the pair needs to break its range-bound trading within the 0.8470-0.8726 area, while a close above the 200-day SMA currently at 0.8818 and the upper surface of the cloud may encourage more aggressive buying interest. Beyond the latter, a taller wall stands around 0.8940, a key support and resistance area during 2018.

A failure to hold above the 50-day SMA would shift the focus back to the 0.8540-0.8470 region, where the market bottomed lately. Should the pair drop lower, marking another lower low and a lower high at 0.8726 in the January downtrend, then the sell-off may easily continue towards the 0.84 and 0.83 psychological levels, making bears more dominant in the bigger picture.


In brief, EURGBP is still trapped within a range with some short-term bullish bias but the downleg from the 0.9110 top keeps the longer-term outlook bearish.