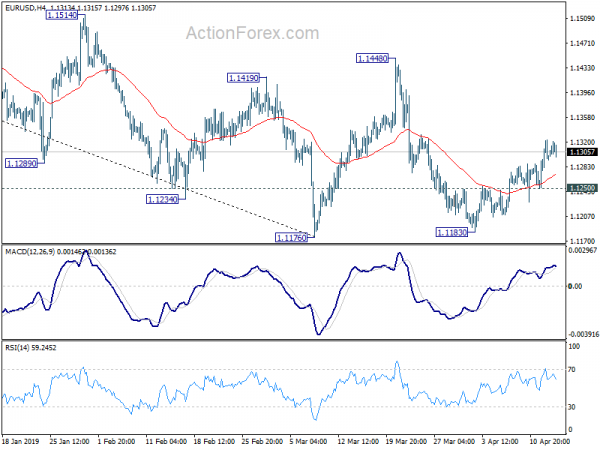 The forex markets turn relatively mixed today and markets lack a general direction. Risk appetite appeared to be firm earlier in Asian session but quickly faded. Major US indices open the day mildly lower. While German 10-year yield is trading up at the time of writing, US 10-year yield is trading down mildly. In the currency markets, Sterling is the strongest one for the moment but it’s still staying well inside recently established range. Canadian Dollar follows as the second strongest., then Euro. Swiss Franc is the weakest one, followed by Australian Dollar. Markets will need more inspiration from the upcoming economic data in the week.

Technically, 112.13 resistance in USD/JPY remains a focus for the rest of the session. Break will confirm resumption of larger rally from 104.69. EUR/JPY is still on track to test equivalent resistance at 127.50. USD/CHF is looking at 1.0040 temporary top and break will resume rebound from 0.9879. GBP/USD, EUR/GBP, GBP/JPY, USD/CAD and EUR/AUD are all bounded in familiar range.


US Empire State manufacturing rose to 10.1, but future conditions dropped to 3-year low

According to a Bloomberg report, US is asking China to shift some tariffs away from agricultural goods to other products. And China is in consideration.

The request came as Trump didn’t want to lift punitive tariffs on China even when a trade deal is made. Yet, Bloomberg said Trump want to “sell any eventual trade deal as a win for farmers ahead of the 2020 election”. But there was no explanation on why the agricultural industry has this special privilege over others. And there is no indications on which industries are going to take the burden, and why.

It’s also noted that the shift could make it easier for China to ramp up its purchases of US agricultural goods as part of the trade deal. But again, there is no details on whether China will cut imports from others countries, and who they will buy less from.

At this point, we’ll treat this as a speculation as no one from USTR nor MOFCOM have responded. And we don’t expect them to.

US watering down demands on SOEs in trade negotiations with China

Separately, according to a Reuters report quoting unnamed sources, the US is stepping back on its demand regarding subsidies to State Owned Enterprises (SOEs)

An important tricky point regarding SOEs is that it’s tightly interwind with the Chinese government’s industrial policy. That’s deeply rooted in the fundamental nature of China’s system, a “systematic rival” to major economies in the world as seen by EU. While China is making concessions in other areas, it’s an area that the socialist country won’t concede ground. A source said that “if U.S. negotiators define success as changing the way China’s economy operates, that will never happen”.

In addition, China is expected to ramp up purchases of US goods as part of the trade deal. But who’s going to make the purchases? It’s most likely the SOEs which the government has direct control on. Thus, another sources said “the purchasing, for example, reinforces the role of the state sector because the purchasing is all being done through state enterprises.”

EU gives final greenlight for trade negotiation with US, except red-line in agriculture

Today, European Council gave the greenback to start formal trade negotiations with the US on two agreements. One is a trade agreement strictly focused on industrial goods, excluding agricultural products. The other is on conformity assessment to make it easier for companies to prove their products meet technical requirements on both sides of the Atlantic.

According to a European Commission analysis, the first agreement would increases EU exports to US by 8% and US exports to EU by 9% by 2033. That is, additional gains of €27 billion and €26 billion in EU and U.S. exports respectively.

European Commission President Jean-Claude Juncker said EU is delivered what he has agreed with Trump on July 25, 2018. Juncker added: “We want a win-win situation on trade, beneficial for both the EU and the U.S. Notably we want to slash tariffs on industrial products as this could lead to an additional increase in EU and U.S. exports worth around €26 billion. ”

At a news conference, Trade Commissioner Cecilia Malmstrom said “I will reach out as soon as they wake up in the U.S…. and see if can have more clarity on when we can meet to have the first talks on this… We are ready as soon as they are… We are definitely determined to do everything we can to finish this during the Juncker Commission”. That is, Juncker’s term ends on October 31.

Malmstrom also added agriculture is “certainly not” a part of the negotiations. And, “this is a red line for Europe and you’ll not find any mention of this in our mandate.”

In the April Monthly Report, Bundesbank said growth picked up only moderately in Q1. Also, the underlying momentum of expansion remained subdued as dragged down by manufacturing downturn. The description of the manufacturing sector are rather dramatic, as orders “literally collapsed” and mode has “significantly deteriorated”.

Separately, German government spokesman Steffen Seibert said for now there is no need for a stimulus package to reinvigorate the economy. He emphasized Germany has a “very solid budget policy”. And, “we are coupling solid budgets with an increase in investments and this should in the coming years improve the basis for more growth.” Seibert added, “the budget stipulates investment spending that is significantly higher than in the previous legislative period and as such we see no need for a stimulus package.”

UK May not thinking about general election, Hunt said it’s not time for leadership contest

UK Prime Minister Theresa May’s spokesman James Slack said today that she is not thinking about an election for the moment. The cross-party talk with Labour regarding Brexit will continue. The talks are now carried out in “smaller groups” which concentrate on “specific issues”. But there is no timetable for an agreement yet. Meanwhile, no-deal preparation would continue towards the new Brexit deadline on October 31.

Foreign Minister Jeremy Hunt also insisted that Conservative party leader contest would only happen after Brexit Withdrawal agreement if voted through the parliament. Hunt added: “There will be a time for all those discussions about whether this shade of person or that shade of person is the right person to take over from the prime minister. But the time for that is when she has announced she’s going and there’s a formal leadership contest.”

EUR/USD’s recovery from 1.1183 is still in progress and intraday bias remains on the upside. Current rise could extend to 1.1448 resistance and above. But in that case, we’d expect strong resistance between 1.1448/1569 to limit upside. On the downside, below 1.1250 minor support will turn bias to the downside. Decisive break of 1.1176 will resume the down trend from 1.2555.