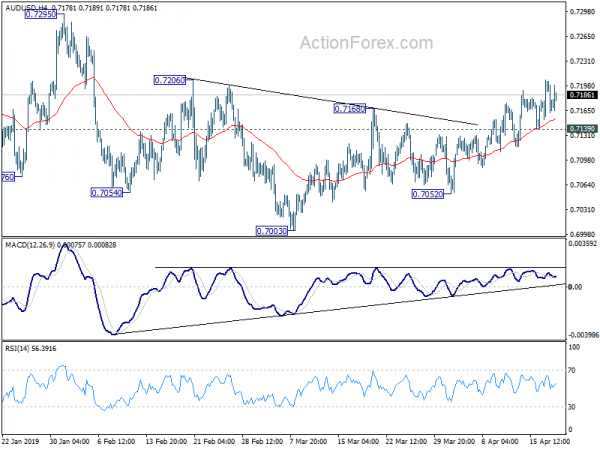 A lot of important economic data are scheduled for today, including Eurozone PMIs, UK retail sales, Canada retail sales and US retail sales. Some more volatility would likely be seen before entering into holiday mode.

The strong gain in full time jobs underlines the robustness in the employment market. However, unemployment rate rose in all regions, only except Victoria, which is a concern. At this point, there is no imminent push for an RBA rate cut in the first up. But situation could worsen ahead that trigger the expected two cuts in the second half. The key will lie in upcoming economic projections in May.

Alan Oster, NAB Group Chief Economist noted that easing of business conditions continued through 2018 into 2019. And they’re only “just above average”. Together with “negative conditions and forwards orders”, they suggest outlook “remains weak”. And the easing in conditions has been “broad based across most industries and all states”, in particular retail.

Oster also said: “For now, we will wait and see how leading indicators of the labour market evolve, though we think it is likely the RBA will act to cut the cash rate and bolster the economy should the labour market deteriorate on the back of weaker activity data”.

Japan PMI manufacturing improved to 49.5, remained stuck in its rut

Japan PMI manufacturing rose to 49.5 in April, up from 49.2 and beat expectation of 49.4. Nevertheless, it’s still the third straight month of sub-50 reading. Markit pointed out that weaker demand from domestic and international markets persists, leading output to fall further. But manufacturing employment remains resilient.

Joe Hayes, Economist at IHS Markit said: “Japan’s manufacturing sector remained stuck in its rut at the start of Q2, with the factors which have prohibited any growth such as US-Sino relations, growth fears in China and the turn in the global trade cycle, all remaining prominent risks. Export orders dipped at a stronger rate in April, domestic demand for goods was similarly weak and firms cut their stocks and scaled back production. Yet again, the service sector will need to pick up any slack to help keep Japan’s economy afloat.”

Yesterday, EU formally announced the list of US imports to be targeted for tariffs as countermeasures on US subsidies to Boeing. The list covers a range of items, from aircrafts to chemicals and agri-food products (including everything from frozen fish and citrus fruits to ketchup), that overall represent around USD20B of US exports into EU. The final list will take into account results of public consultation and WTO arbitrator’s decision.

EU Trade Commissioner Cecilia Malmström said: “European companies must be able to compete on fair and equal terms. The recent WTO ruling on U.S. subsidies for Boeing is important in this respect. We must continue to defend a level-playing field for our industry. But let me be clear, we do not want a tit-for-tat. While we need to be ready with countermeasures in case there is no other way out, I still believe that dialogue is what should prevail between important partners such as the EU and the U.S., including in bringing an end to this long-standing dispute. The EU remains open for discussions with the U.S., provided these are without preconditions and aim at a fair outcome.”

Also released, Germany PPI dropped -0.1% mom, rose 2.4% yoy in March. Swiss trade surplus widened to CHF 3.18B in March. Eurozone PMIs and UK retail sales are the main focuses in European session. In particular, Eurozone PMIs will have to show more evidence of resilience to solidify the optimism on stabilization in the slowdown.

While upside momentum in AUD/USD is unconvincing as seen in 4 hour MACD, with 0.7139 minor support intact, further rise is in favor for 0.7295 resistance. Since the structure of the recovery is corrective looking, upside could be limited by 0.7295 to bring near term reversal. On the downside, break of 0.7139 minor support will turn intraday bias back to the downside for 0.7003/7052 support zone.