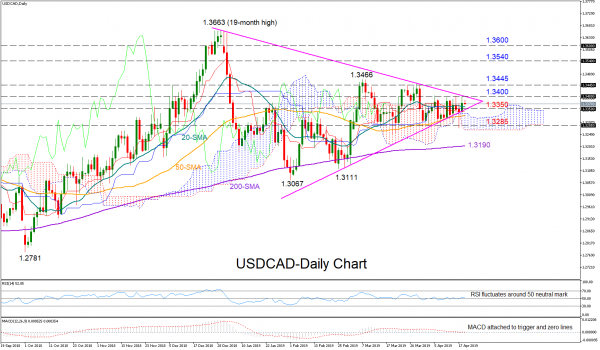 USDCAD had another uneventful week as it was congested within the 1.33 area. According to the RSI and the MACD the pair is likely to continue consolidating in the short-term as both indicators show no clear direction. Yet and more interesting, the market seems to be completing a symmetrical triangle, hinting that the sideways move may soon come to an end.

A breakout from the upper trendline currently seen around 1.34 would mark the start of a bullish phase, while only a close above 1.3445 would confirm a growing uptrend. Further up, the area between 1.3540-1.3600 has been a key resistance area during 2016-2017 and therefore should be in focus.

Following a breakdown of the lower bar near 1.3350, negative sentiment would heat up, with the bears probably taking full control under 1.3285. Lower, the 200-day simple moving average (1.3190) could trigger a more aggressive sell-off if the line fails to stop downside movements, shifting attention towards the 1.3111 and 1.3067 troughs.


Meanwhile in the medium-term picture, conditions are neutral as well, with the pair hovering within the 1.3466-1.3067 boundaries. Any violation at these points would change the outlook accordingly.