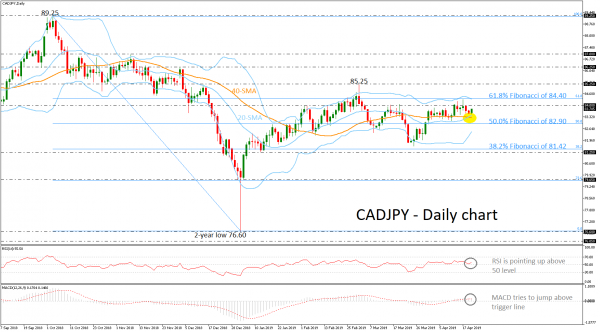 CADJPY has been finding strong support on the bullish cross of the 20- and 40-day simple moving averages (SMAs) since the beginning of this month, creating a narrow sideways move above the 50.0% Fibonacci retracement level of the downleg from 89.25 to 76.60, near 82.90.

Having a look at the momentum indicators, the RSI is pointing up above the neutral threshold of 50 and the MACD is hovering marginally above the trigger and zero lines. Also, the price action holds above the mid-level of the Bollinger band, creating a short-term trading range between the 38.2% Fibonacci of 81.42 and the 61.8% Fibonacci of 84.40. It is worth mentioning that the Bollinger bands are narrowing, approaching the price action, suggesting a possible strong movement in the near future.

An advance above the 84.00 handle and the upper Bollinger Band, which stands near the 61.8% Fibonacci, could open the door for bullish actions towards the 85.25 resistance. Even higher, resistance would be faced around the 86.25 peak, registered on March 1.