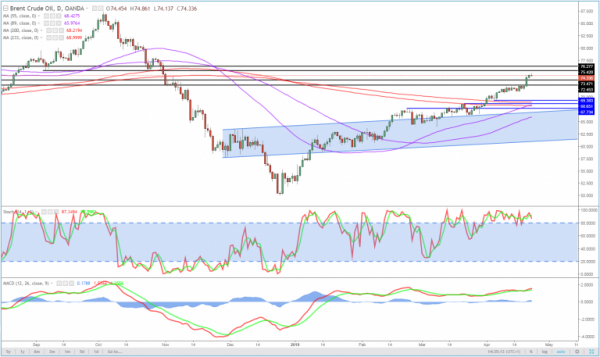 Oil prices are creeping higher again on Tuesday, although they have lost a little of the spark that saw them steamroll through yet another key resistance area at the start of the week. There isn’t much doubt about the trigger for the latest rally, with Trump’s decision not to extend waivers on imports of Iranian oil beyond May unsurprisingly providing further upward pressure – although I’m sure he’ll just blame OPEC.

The rally took gains in WTI to more than 50%, since it bottomed out back in December. That’s not a bad return and makes the OPEC+ meeting in June all the more interesting, with an extension to December now a doubt, especially with Russian support already a doubt.


Reports that Saudi Arabia and UAE will make up the shortfall from the sudden decline in Iranian output is doing little to stop the moves, given that both are currently cutting production to comply with the agreement.

From a technical perspective, momentum hasn’t really backed even the latest move which suggests the rally may be running out of steam. This would be perfectly understandable at this point. We’ve run into resistance around $75 today, at which point the stochastic is making a lower high, as is the MACD histogram. While this negative divergence isn’t a bearish signal in itself, it could be construed as a red flag.

If this continues to push higher, through highlighted resistance above, the $79-80 becomes notable potential resistance. $78 is a recent peak as well but prior to this, support and resistance was frequently found in the $79-80 range.

If we see a corrective move, $72.50-73.50 could offer the first test, with roughly $67.75-69.40 below here being interesting. Not only was that a recent strong area of resistance, the cluster of moving averages also makes it interesting.