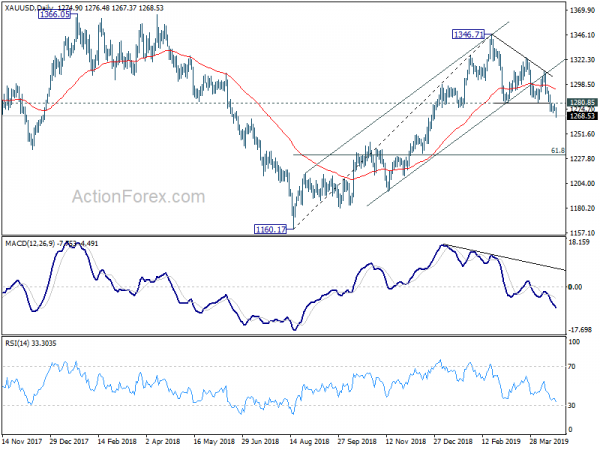 Dollar rises broadly in early US session as traders seem preparing for solid Q1 earnings reports in US. Stocks indices are relatively steady, though, with DOW, S&P 500 and NASDAQ up slightly in initial trading. But after all, improvement in the overall sentiments could revive the chance for a Fed hike later in the year. Also, recent surge in oil prices could eventually be fed into rise in core inflation, which is another factor for a Fed hike. Nevertheless, Q1 GDP report to be released on Friday would be the first make or break for the greenback.

Staying in the currency markets, Yen is following Dollar as the second strongest one. Sterling is the third strongest for now. Swiss Franc is the weakest one as funds are flowing out from this safe haven, partly thanks to rally in oil prices. Australian Dollar is the second weakest, followed by New Zealand Dollar. Aussie will be vulnerable to steep selloff should CPI data featured in upcoming Asian session disappoints. Gold also breaks 1270 handle on Dollar strength.

Technically, with break of 1.1226 temporary low, EUR/USD is heading towards 1.1176 key support and break will resume larger down trend from 1.2555. GBP/USD’s break of 1.2960 support suggests earlier than expected near term reversal and turns outlook bearish for 1.2773 support. AUD/USD’s accelerates downward towards 0.7052 support and break will solidify near term bearishness. USD/CAD, however, is still awaiting upside range breakout.

Gold’s near term down trend resumes today thanks to broad based strength in Dollar. The development also further solidify the case of medium term reversal. That is, rise from 1160.17 has completed at 1346.71, on bearish divergence condition in daily MACD. Near term outlook will now stay bearish as long as 1280.85 support turned resistance holds. Gold is targeting 61.8% retracement of 1160.17 to 1346.17 at 1234.42 and below.

ECB Coeure: Growth to return in H2, no grounds for overly gloomy thoughts

ECB Executive Board Member Benoit Coeure said in a newspaper interview that policymakers expected “growth to return in the second half of the year”. He told German daily Frankfurter Allgemeine Zeitung “there are no grounds for overly gloomy thoughts”. However, he admitted for now “it is very uncertain how long and how strong the downturn will be.”

On monetary policy, Coeure sees no argument for tiered deposit rate. He urged banks to focus on their own costs, rather than blaming ECB’s negative rate for lower profits. Meanwhile, currently, markets are pricing in no rate cut until at least 2021. Coeure warned “we are not tied to such market expectations; they are an important input, but we are not led by them.” He added market pricing are merely reflecting “an assessment of the downside risks which is different to that of the Governing Council”.

Maeda: BoJ ready to use combinations of measures to ease further if needed

Eiji Maeda, BoJ Executive Director of International Affairs, reiterated the central bank stands ready to ease monetary policy further if needed. He said in the Diet that “if the economy’s momentum for achieving our price target is threatened, we are ready to ease monetary policy as necessary”. And, “we’ll continue to take steps as needed, including a combination of them, with an eye on their effects and side-effects” on the financial system.

Separately Finance Minister Taro Aso said there is no plan for the government to test a heterodox modern monetary theory. That is, countries issuing their own currencies can never run out of money”.

EUR/USD’s fall resumes after brief consolidation and reaches as low as 1.1213 so far. Intraday bias is back on the downside for 1.1176 key support. Decisive break there will resume whole down trend form 1.2555. For now, near term outlook will be cautiously bearish as long as 1.1324 resistance holds, in case of recovery