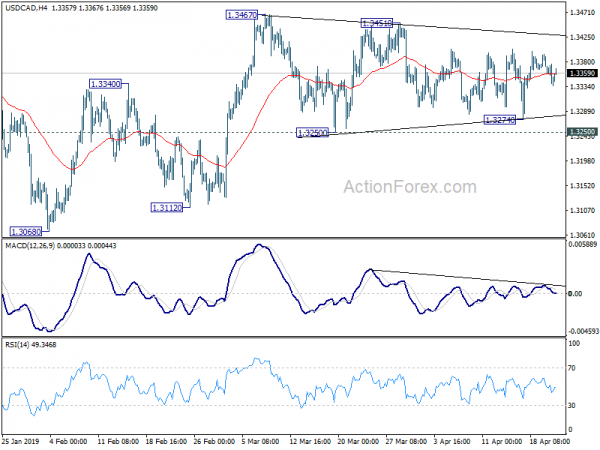 The forex markets remain relatively quiet in Asian session today. Canadian Dollar surged briefly yesterday as lifted by rally in oil price. WTI crude oil remains firm in at 65.80, after rising on news that US is ending Iranian oil sanction wavier for eight countries. But the boost to the Loonie is rather brief while it turns soft ahead of BoC meeting later in the week.

As for today, Yen is the strongest one so far as Asian markets turn soft coming back from holiday. Sterling follows as the second as yesterday’s selloff lost momentum. Dollar is third with some support from rebound in US yields. Nevertheless, 2.6 remains a hurdle to overcome for 10-year yield. Australian, Canadian and New Zealand Dollar are the weakest.

Technically, both USD/JPY and EUR/JPY breach 111.69 and 125.61 minor supports today. But there is no following through selling. EUR/USD’s recovery also lost steam just ahead of 4 hour 55EMA. The three-way actions will remain in focus today.

Maeda: BoJ ready to use combinations of measures to ease further if needed

He said in the Diet that “if the economy’s momentum for achieving our price target is threatened, we are ready to ease monetary policy as necessary”. And, “we’ll continue to take steps as needed, including a combination of them, with an eye on their effects and side-effects” on the financial system.

Separately Finance Minister Taro Aso said there is no plan for the government to test a heterodox modern monetary theory. That is, countries issuing their own currencies can never run out of money”.

Japan is seeing limited impact as US ends the Iranian oil sanction waiver for the country. Trade and Industry Minister Hiroshige Seko said in a regular press conference that Japan has been lowering its reliance on Iranian oil import, which only accounts for 3%. And, there is no need to tap the national oil reserve with decision of the US.

Though, he noted, “we will closely watch international oil markets and exchange views with Japanese companies involved in crude imports and may consider taking necessary measures.”

The US decision to end the waiver will force eight countries, including China, Greece, India, Italy, Japan, South Korea, Taiwan and Turkey, to switch their oil supplies from Iran to other countries, starting May 2.

USD/CAD is staying in consolidation from 1.3467 and intraday bias remains neutral first. More sideway consolidation could still be seen but upside breakout is expected sooner or later. On the upside, firm break of 1.3467 will confirm this bullish case and target 1.3664 resistance next. However, decisive break of 1.3250 will turn bias back to the downside for 1.3068/3112 support zone instead.