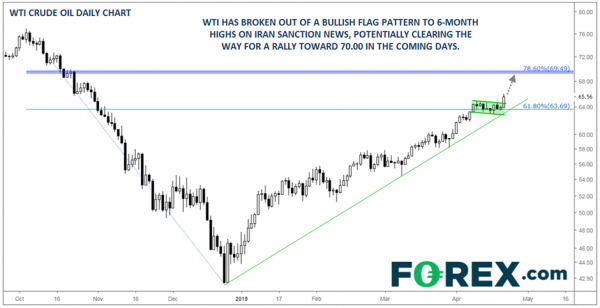 Earlier this month, we noted that April has historically been the most bullish month for West Texas Intermediate (WTI) crude oil, with the commodity gaining an average of nearly 5% in the month over the last 15 years (and a stellar 9% on average over the last 5 years).

That seasonal trend is playing out in spades this year, with oil tacking on another 2.5%+ so far today to hit its highest level since Halloween:

The proximate catalyst for today’s rally in oil prices is the news that the US will end waivers to countries importing oil from Iran next week. Assuming these countries, which include China, India, and Japan among others, cease imports from Iran, it could remove roughly 1 million barrels per day off the global supply.


From a technical perspective, WTI has broken out of a bullish flag pattern and has definitively cleared the 61.8% Fibonacci retracement of its Q4 collapse. Back in late October, WTI dropped from the 70.00 level to the lower 60.00s in a little over a week, leaving little in the way of previous support and resistance in this zone. Given this area of price inefficiency, oil could rally back to test the 78.6% retracement near the psychologically-significant 70.00 handle in relatively short order.