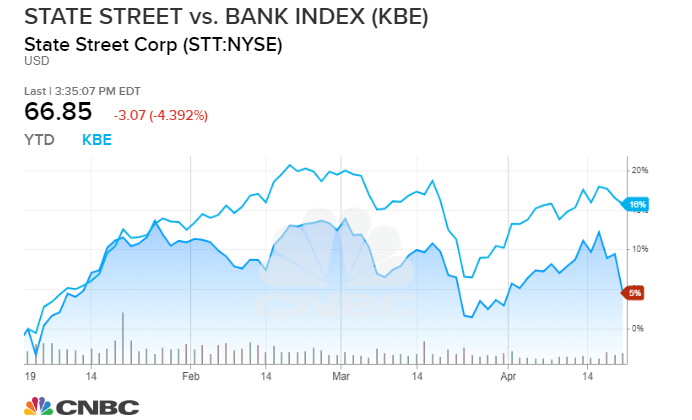 In a research note issued after State Street’s earnings were released Tuesday morning, Mayo writes “STT needs to improve pay-for-performance and management accountability, especially after the release of 2019 proxy and disappointing first quarter 2019 and decade to date results.”

State Street reported earnings of $508 million for the first quarter- a 23 percent drop from the same time period a year ago. Revenue dropped four percent.

Specifically Mayo goes after the pay package of former CEO and current chairman Jay Hooley who reportedly made $141 million dollars over nine years “despite missed targets and worst in class stock price performance.”

Hooley left his job as CEO late last year but remains chairman of the board.

Two weeks ago several Wall Street bank executives including State Street’s current CEO Ronald O’Hanley were hauled before the House Financial Services committee led by California Democrat Maxine Waters in what many would call a dressing down on several fronts, including high executive pay.

In a statement to the committee O’Hanley made it clear his bank was different from the others called to testify in that it only served institutional clients such as pension funds, mutual funds and sovereign wealth funds. At the end of 2018 the bank had assets totaling $245 billion.

State Street did not return repeated requests to comment on Mayo’s note, but in the testimony before the House Financial Services Committee April 10th, O’Hanley had this to say about State Street’s pay packages: “State Street unequivocally supports equal pay for equal work. Given the competitive, talent-driven industry that we operate in, we are focused on incentivizing, rewarding, retaining, and motivating superior employees through performance-driven compensation in a manner aligned with sound risk management and our corporate values.”

State Street plays an outsized role in the world of investing because it is one of the biggest shareholders of companies in the United States, meaning it has tremendous power in proxy votes.

In a phone interview, Mayo told CNBC “The biggest owners of US stocks are index funds – Blackrock, Vanguard and State Street. They have a lot of power. My view is that one of the firms that tells so many others what to do – State Street – isn’t taking their own medicine” prodding shareholders to reign in high pay at the bank if the company isn’t going to do it themselves.