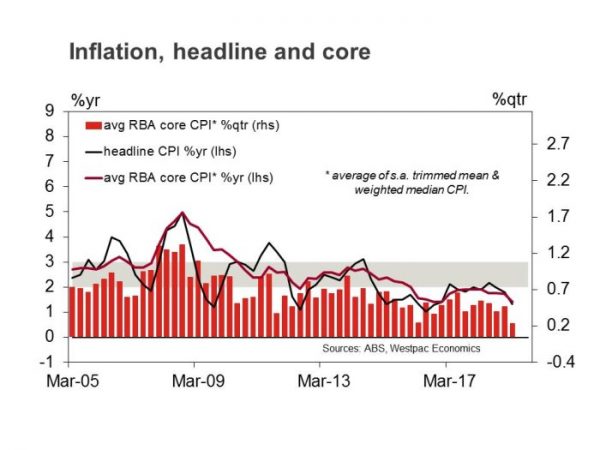 Inflation surprises to the downside – the return of Godot

The March Quarter CPI was flat (0.0%) compared to the market median of 0.2% and Westpac’s forecast for 0.1%. At two decimal places the CPI was also flat (0.0%qt) with the annual rate dropping to 1.3%yr (from 1.8%yr) the slowest annual pace since September 2016. With another subdued print, the six month annualised pace is now just 1.1%yr (using seasonally adjusted data) the slowest pace since June 2016 highlighting that the inflationary pulse continues to remain well under the bottom of the RBA’s target band.

The average of the RBA’s core measures, which are seasonally adjusted and exclude extreme moves, rose 0.2%qtr below market expectations for 0.4% and Westpac’s forecast for 0.3%. In the quarter, the trimmed mean gained 0.28% while the weighted median lifted 0.10%. The annual pace of the average of the core measures printed 1.4%yr the slowest pace of core inflation since December 2016.

Incorporating revisions, the six month annualised growth in core inflation is now just 1.2%yr, well below the bottom of the RBA target band and the slowest pace since December 1997.

Standouts in the quarter were: on the positive or high side of expectations there was very few:

Food rose 1.3% vs 1.1% expected, with drought and adverse weather conditions continuing to reduce the supply of a selection of fruits and vegetables added to higher input costs placing upward pressure on other food items such as poultry and bread. Clothing & footwear fell 1.4% vs. –2.0% forecast.

Prices that fell or where on the low side of expectations:

The softer than expected housing cost print reflected the fall in dwelling prices (–0.2% vs forecast for a flat print – this reflected a significant fall in Victorian dwelling prices of 1.2%qtr) rents reported a modest 0.1% rise as expected while utilities surprised with a 0.1% fall.

Tradables rose 0.4% in the March quarter. The tradable goods component fell 0.6% due to automotive fuel (-8.7%). The tradable services component fell 2.0% due to international holiday, travel & accommodation (-2.1%). It is worth noting that petrol prices have been rising solidly in recent weeks on the back of surging crude oil prices.

Inflation is stuck well below the target band with little reason to expect it to return there anytime soon.

It was hard to find even some isolated inflationary pressures; even tobacco prices surprised with a fall in the quarter. Clothing and footwear may not have fallen as much as expected but they are not a galloping inflationary pulse either.

Housing has a significant group weighting in the CPI (22%) so it has a meaningful impact on both inflation and core inflation. With such a modest outlook for housing costs we can find little to suggest any risk of a meaningful acceleration in core inflation from below the bottom of the RBA’s target band.